A meeting of the two political leaders on the sidelines of the Apec summit in the Peruvian capital Lima comes amid deepening concerns in Beijing over a fledgling independence movement in Hong Kong and recent street protests in the city.

Hong Kong's High Court last week backed a government demand to bar two recently elected lawmakers from the city's legislature, after the court and Beijing both ruled they had insulted China when taking their oath of office. 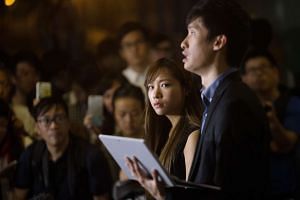 Demonstrators angry at Beijing's ruling against the two lawmakers clashed with riot police last week, unfurling umbrellas to block pepper spray in scenes reminiscent of the 2014 pro-democracy protests, dubbed the "Umbrella Movement", that brought key intersections to a halt for weeks on end.

Hong Kong, a former British colony, returned to China in 1997 under a "one country, two systems" agreement that ensured its freedom and wide-ranging autonomy, including a separate legal system.

But Communist Party rulers in Beijing have ultimate control, stepping in to interpret the Basic Law, and some Hong Kong people are concerned they are increasingly interfering to head off dissent.