Mirroring the largely restrained reaction from Beijing so far, Chinese media have downplayed the phone call between United States President-elect Donald Trump and Taiwan President Tsai Ing-wen, putting it down to the inexperience of Mr Trump and his team.

But they slammed Ms Tsai and her team for the "petty gambit", warning her not to try "tricks" that could raise cross-strait tensions.

The phone call was the first direct contact reported between a US president or president-elect and a leader of Taiwan since Washington established diplomatic relations with Beijing in 1979.

An editorial in the state-owned China Daily dismissed the importance of the 10-minute phone call last Friday, even though it acknowledged it was unprecedented.

It said the call had "exposed nothing but his (Mr Trump's) and his transition team's inexperience in dealing with foreign affairs".

A commentator named Zhishan from state-owned broadcaster CCTV was quoted as saying that while Mr Trump will bring his distinctive personality into the White House, he does not have the ability to influence Sino-US ties. 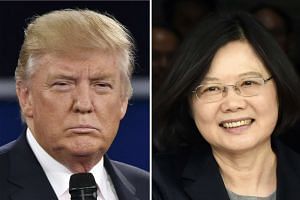 Fears in Taiwan that Trump using it as a bargaining chip 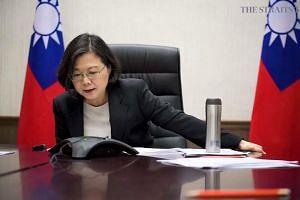 The development of Sino-US ties has its inherent drivers, and meetings between leaders over the years have maintained deep strategic communication between both sides, which will not change due to a phone call, said the commentator.

A Global Times editorial noted Mr Trump "has been known for not playing by the rules since he started running for president". It said: "By answering Tsai's call, he may want to test how China would react and therefore prepare him for dealing with the country and gaining some advantage after he takes office."

It warned that if Mr Trump wants to "overstep the One-China principle", he will destroy Sino-US ties, overturning the "current pattern between Beijing and Washington as well as international order".

Meanwhile, some in the Chinese media urged Ms Tsai to give up the illusion that the call will help improve Taiwan's chances for formal independence from China. "If the Taiwan government ever does anything to break the status quo, it must pay the price," said The Global Times.

Echoing sentiments in Chinese academic circles where many believed Beijing should react more strongly to Mr Trump's action, Sino-US expert Shen Dingli of Fudan University told The New York Times that China should cut ties with the US if Mr Trump continues to maintain contacts with Taiwan after taking office. "I would close our embassy in Washington and withdraw our diplomats," he said. "I would be perfectly happy to end the relationship."