SICHUAN - Instead of scaling an 800m cliff on nothing but vines and tree branches, children from China's Atuler village in Zhaojue county now have a safer means to make the climb to and from school.

The authorities have reportedly installed a steel ladder along the route, shortening a perilous two-way journey that takes two hours to climb and 90 minutes to descend.

Photos of 15 children using a rickety chain of wooden ladders to get home from a boarding school went viral in May this year.

The makeshift ladders, according to a villager, are as old as the centuries-old village, which is sited on a plateau at the top of a cliff.

They were also the only means for villagers to reach the outside world. 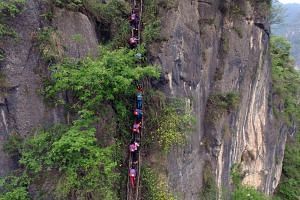 Going to school an uphill battle

The 15 children who make the climb every two weeks are aged between six and 15, and belong to the 72 families who live in houses made of mud, thatch and wood in the village.

Villagers also keep their trips to the outside world to a minimum - they visit the nearest market a couple of kilometres away once a week to buy necessities and sell agricultural products.

At least seven villagers were reported to have plunged to their deaths after losing their grip on the wooden ladders.