BEIJING (AFP) - The founder of a prominent Chinese civil and human rights website was sentenced to five years in prison on Tuesday (Jan 29) for inciting state subversion, according to human rights organisations.

Liu Feiyue created and ran the Civil Rights and Livelihood Watch website, which covers a range of civil and human rights issues, including protests, police abuses, and government corruption - sensitive topics that are scrubbed from most Chinese media sites.

The Suizhou Intermediate People's Court in central Hubei province sentenced him after he was found guilty of "inciting subversion of state power", according to Human Rights Watch.

There are "serious flaws in the procedure of this case, without due process in line with international standards", he added.

Wang is one of more than 200 lawyers and activists who were swept up in a 2015 crackdown aimed at courtroom critics of Communist authorities. 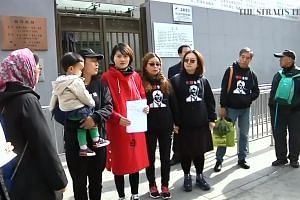 Arrested in 2016 for "leaking state secrets", Huang has since been held in a detention centre in south-western Sichuan province and was expected to go on trial earlier this month.

Liu was detained around the same time, according to Poon.

"Prosecuting the editor of a human rights website shows just how frightened the Chinese government is about independent reporting on abuses from inside China," said Yaqiu Wang, China researcher at Human Rights Watch, in a statement on Liu's sentence.