Mr Wang Yi, China's state councillor and foreign minister, said in response to questions from Reuters that the Trump administration had shown goodwill by waiving tariffs on many Chinese products.

"And so, (on) the Chinese side, we are willing to buy more products that are needed by the Chinese market," Mr Wang said on the sidelines of the United Nations General Assembly.

"We hope both sides can take more enthusiastic measures, reduce pessimistic language and actions. If everyone does this, talks will not only resume, but will proceed and yield results."

The US and China are preparing for another round of high-level trade talks in early October in Washington to try to find a way out of their nearly 15-month trade war.

The world's two largest economies have heaped hundreds of billions of dollars in tariffs on each other's products, roiling financial markets and disrupting global supply chains.

US President Donald Trump on Wednesday said that a trade deal with China could come sooner than people think, and praised the Chinese purchases.

In his speech to the annual gathering of world leaders on Tuesday, Mr Trump issued a stinging rebuke of China's trade practices and state-led development model. He said that he would not accept a "bad deal".

Reuters' report of Mr Wang's remarks caused US stocks to pare losses and briefly turn positive on Thursday afternoon, capping selling driven by the impeachment inquiry opened by Democrats in Congress of Mr Trump, a Republican. 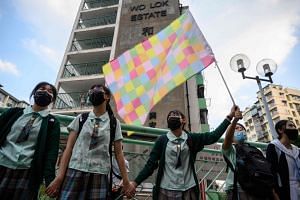 US pressures China on Hong Kong, Uighurs and trade

Chinese importers last week purchased about 600,000 tonnes of US soybeans, or about 10 shiploads, a market analyst said.

"I would say that mood music, if you will, is very positive going into the negotiations," White House economic adviser Larry Kudlow said on Fox Business Network.

When asked by Reuters if US criticism of China's policies on Muslim minority Uighurs in Xinjiang and Hong Kong political protests could affect trade talks, Mr Wang said: "We hope trade talks can have a loose and good foreign environment."

China has been widely condemned for setting up complexes in Xinjiang that it describes as "vocational training centres" to stamp out extremism and give Uighur people new skills. The United Nations says at least a million ethnic Uighurs and other Muslims have been detained.

Mr Trump called for an end to religious persecution on Monday at a US event on the sidelines of the annual UN gathering, which featured a woman whose Uighur father has been imprisoned in China.

The US led more than 30 countries in condemning what it called China's "horrific campaign of repression" against Muslims in Xinjiang at a second event on Tuesday.

"The Chinese side does not accept any criticism that is not based on facts. Xinjiang has not had any violent incident in three years," Mr Wang said.

In Hong Kong, months of sometimes-violent demonstrations show no sign of letting up, with protesters angry about what they see as creeping interference by Beijing in their city's affairs despite a promise of autonomy.

"What is the basis for criticising China? For Hong Kong, right now, it's the violent actors that are violating the rule of law, that are disrupting public order," Mr Wang said.