BEIJING - China's Foreign Ministry said on Saturday (Dec 17) that it was "appropriately" handling the seizure of a US underwater drone through military channels with Washington.

“It is understood that China and the United States are using military channels to appropriately handle this issue,” the ministry said in a brief statement sent to Reuters, without any elaboration.

The statement came a few hours after the Global Times, a newspaper with links to China's Communist Party, said that relevant departments on both sides had smooth communication channels.The matter should be "resolved smoothly", the newspaper said, citing an unnamed military official.

The seizing on Thursday (Dec 15) is possibly a signal to the US that it will not back down from its South China Sea policy no matter what pressure Washington brings to bear on it, said Associate Professor Li Mingjiang of the Rajaratnam School of International Relations at the Nanyang Technological University

Beijing was responding to critical comments from President-elect Donald Trump, his nominated security chiefs and the commander of the US Pacific Command Harry Harris, said  Prof Li.

A Chinese navy boat on Thursday seized the unmanned underwater glider as it came up to the surface of the water in the South China Sea and was about to be retrieved by sailors of the USNS Bowditch, an oceanographic and surveillance ship, the British newspaper Guardian reported.

The incident took place about 160km north-west of the Philippines port of Subic Bay, within the Philippines' exclusive economic zone and not far from the disputed Scarborough Shoal which the Chinese now patrol.

"China is doing this to send a signal to the US, to tell the Americans 'no matter what you say, no matter what critical views you have, no matter what pressure you exert on China, China is not going to back down, it will do things that China regards as appropriate in the South China Sea dispute'," said Prof Li. 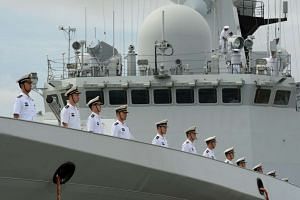 China has overlapping claims in the South China Sea with the Philippines, Vietnam, Malaysia, Brunei and Taiwan, and has been increasingly assertive in its claims including building artificial islands on reefs it controls and placing military installations on them.

Mr Trump had in recent days criticised China's island-building in the South China Sea and its militarisation of the vital waterway which is also rich in resources and an important fishing ground for many countries in the region.

Admiral Harris, meantime, said on Wednesday that there would be no change to US commitment to the Asia-Pacific under Mr Trump, who will assume office on Jan 20.

"We will not allow a shared domain to be closed down unilaterally, no matter how many bases are built on artificial features in the South China Sea," he said in Australia at the Lowy Institute, a think-tank.

"We will cooperate when we can but we will be ready to confront when we must," he warned.

Calling the US "overbearing", Chinese security analyst Wang Xiangsui cautioned that more serious incidents would happen if the US continues with its activities in the region.

"Chinese people are full of indignation and feel the need to be tough on the US," he said of Chinese public opinion.

Chinese netizens on Saturday mainly approved of the seizure of the underwater drone.

"The South China Sea is China's territory, territorial sovereignty. When the US breaks into other people's garden, it has broken the law," wrote netizen "happy yipin".