BEIJING(AFP) - From hiring ghostwriters and forging sports credentials to generous 'gift-giving', admissions middlemen in China are advising wealthy parents to take an array of 'shortcuts' to secure places at foreign universities.

The service comes with a hefty price tag, often running into tens of thousands of dollars, but nonetheless the industry is booming.

The lengths to which some are willing to go to were highlighted in the admissions scandal that shook US universities this year, where prosecutors found one Chinese family had given US$6.5 million (S$9 million) to an admissions agent to get their daughter to Stanford, while another had coughed up US$1.2 million for entry to Yale.

The case saw dozens of people - including Hollywood stars and CEOs - plead guilty to using bribery to ensure places at prestigious schools, but education experts in China say it's not unusual to advise such practise to families keen on foreign universities.

"In the admissions world, it's called gift-giving instead of bribing. About US$10,000 is on the lower end of the spectrum. An average gift will be about US$250,000," one former college counsellor revealed, on condition of anonymity.

"I have done things I am not proud of including coaching parents on how to embellish transcripts or fake sports credentials. I have received mangled essays, which are then heavily edited by professionals," one advisor confessed.

Fu Rao's family spent 250,000 yuan ($36,300) on her admissions consultant. The entire package included advice on how to correspond with professors, which courses to take to make sure her high school transcript was filled with A grades, and how to chat about American football.

It has been an 18-month process so far during which she has also taken the SAT exam, a standardised test to enter US colleges four times - so she was certain she would get the score she needed. 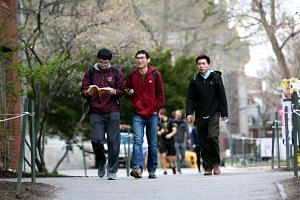 Put off by US, Chinese students eye other universities

China warns students, academics of risks of studying in US

A professional editor has fine-tuned her admissions essays and resume, and, on the advice of her consultant, she's volunteered at an orphange in Cambodia.

"Many students volunteer at schools for rural children in China, so I had to do something different to make my application stand out from the crowd," explained 16-year-old Fu.

Nearly a dozen parents interviewed by AFP said they were willing to shell out top dollar to admissions services, because they felt they were taking a huge risk by sending their children abroad, with the US, Britain, and Australia most popular for higher education.

Chinese students wanting to study abroad take a risk by skipping the gaokao, the country's notoriously difficult college entrance test, which is the only route to Chinese universities. This gives them time to prepare for a completely different set of standardised tests.

"But, if the student fails to secure a seat abroad, it's very difficult to resume their studies within the Chinese system. So its a the point of no return," conceded Huang Yinfei, Fu's mother.

"The culture of the Chinese education system looks for shortcuts, and a money solves everything approach," he added.

The country's foreign college admission services industry is expected to grow to US$35 billion by 2021 from US$28 billion in 2017, according to a February report by the state-backed Chinese Students and Scholars Association.

As incomes rise, even parents in smaller towns were aspiring for a world-class education for their children, instead of the rigid, rote learning at local universities, the report said.

China accounts for nearly a third of foreign students on US campuses, but in March their numbers dropped for the first time in a decade.

Visa delays, concerns over being shut out of research projects and safety fears have turned off Chinese students, amid political tensions between the two nations.

China is the biggest source of international university students in Britain and applications have jumped 30 per cent in the past year.

"So parents are desperate to get their children to big-name universities and believe starting young is the way to beat the competition."

At just 15 years old, Shirley Yu is one of these young students already preparing for university.

Yu, who uses an admissions consultancy firm, said she discovered her love for film making while in eighth grade.

"My mum really wanted me to study economics. She doesn't see movie making as a promising career," the 15-year-old said.

"So I made a short film about a girl who wanted to become a dancer and asked my mother to play the role of the adult who was opposing her. Eventually, she changed her mind."

She has also taken extra classes in animation and visual effects during summer breaks, according to a plan drafted together with her counsellor.

Others start even earlier with one firm offering reading, writing and debating classes for children starting from first grade.