SHANGHAI/BEIJING (REUTERS) - A global stock rout earlier this week reminded investors about the power of the United States President's Twitter account, but in China, where selling was heaviest, a ban on media coverage of his comments has raised questions about Beijing's push to internationalise its capital markets.

President Donald Trump on Sunday tweeted threats to hike tariffs on US$200 billion (S$272 billion) of Chinese goods this week and target hundreds of billions more, reviving worries about continuing trade talks and knocking China's stock benchmarks down over 5 per cent.

Institutional investors were able to read the latest developments through globally connected trading terminals when markets opened on Monday. However, many retail investors, who make up roughly 80 per cent of China's stock market turnover, did not know what was behind the local equities plunge until much later in the day.

"Clearly, the kind of censorship that we saw could only slow down information transmission," said Mr Paul Luk, assistant professor at the department of economics at Hong Kong Baptist University.

"This means that those who receive the information more readily, which include institutional investors, international financial institutions and well-connected sophisticated investors, can adjust their positions before retail investors," he said, estimating individual investors took the bulk of losses in Monday's sell-off.

Media outlets at the time were told by Beijing not to independently report on Mr Trump's Sunday tweets. Related content was also censored on social media, and strategists were advised not to mention Mr Trump in their analysis.

Even if retail investors receive any information through authorised media in China, it is often limited or dated.

Industry participants say such curbs run counter to regulators' desire to protect small investors against the advantages of larger players and threatens to dent China's attempts to foster a fair and transparent capital market attractive to foreign investors. 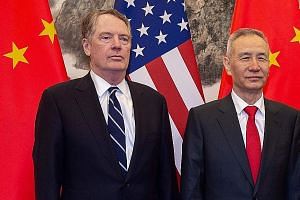 China backtracked on nearly all aspects of US trade deal: Sources

In April, the American Chamber of Commerce in Shanghai urged Beijing to ease Internet restrictions in Shanghai's free trade zone to give its citizens access to Google and other sources of information, saying the restrictions "severely handicap" the city's ambition to become a global financial centre.

"Many of my stock-investing friends had to bite the bullet.

It was too late to pull out when they finally figured out what happened," said Mr Xie, who works at a state-owned company.

Even some institutional investors were caught off guard.

Mr Yang Tingwu, a fund manger in the southern province of Fujian, initially thought the sell-off was just a "technical correction". He learnt about the Trump tweet at around 2pm that day from his more informed subordinates.

Attempts by some analysts to fill the information vacuum also failed due to censorship.

Mr Yang Hai, strategist at Kaiyuan Securities, said his efforts on Monday to publish his daily market analysis - including mentions of Mr Trump's threatening tweets - via WeChat repeatedly failed. The app is operated by Tencent.

Eventually, frenetic "guerrilla-style" reposting of screenshots of Mr Trump's tweets on social media helped the news break through China's "Great Firewall" on Monday. But even then, China's major securities newspapers remained silent about the tweets in their market analysis on Tuesday.

"Stock markets are objective things, they can't stop reporting that. So, in China, you can see the effect but not the cause, and you wonder if that's not more destabilising," said Mr Graeme Smith, fellow at the Department of Pacific Affairs at the Australian National University.

"It comes down to the crudity of the propaganda playbook, where if they have a hammer, they use the hammer."