BEIJING • Former China central bankers warned yesterday of currency-war risks with the US after an abrupt escalation of trade tensions between the world's two biggest economies last week.

The US labelling China as a currency manipulator "signifies the trade war is evolving into a financial war and a currency war" and policymakers must prepare for long-term conflicts, Mr Chen Yuan, former deputy governor of the People's Bank of China (PBOC), said at a China Finance 40 meeting in Yichun, Heilongjiang.

Former PBOC governor Zhou Xiaochuan said at the gathering that conflicts with the US could expand from the trade front into other areas, including politics, military and technology. He called for efforts to improve the yuan's global role to deal with the challenges of a dollar-denominated financial system.

The PBOC allowed the yuan to weaken below seven yuan to the dollar last week, prompting the US to accuse China of currency manipulation. US President Donald Trump said talks with China planned for next month could be called off.

Domestically, the conflicts added a new dimension to China's balancing act: how to support the economy while avoiding an exchange rate that widens its rift with the US.

The US currency-manipulation charge is part of its trade war strategy, and it will impact China "more deeply and extensively" than the trade differences, Mr Chen said yesterday. While China should try to avoid further expanding the disputes, policymakers must be prepared for long-lasting conflict with the US over the currency.

The US move is an "appalling" act to gain an advantage during trade negotiations and is doomed to fail, the Communist Party's flagship newspaper People's Daily said in a commentary yesterday.

While markets have not reacted too strongly to the weakening yuan, it is possible that "the yuan could weaken further on unexpected shocks in the future", Mr Yu Yongding, a researcher at the Chinese Academy of Social Sciences, said in Yichun. 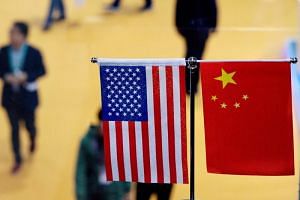 With policymakers seemingly determined to make the yuan more flexible, the PBOC "should be patient and not adjust policies in haste because of short-term market volatility", Mr Yu said. "It won't benefit the PBOC's credibility and won't benefit forex reform."

Mr Trump on Friday said he will not devalue the dollar amid an escalating trade war with China that has unleashed tit-for-tat actions on trade and currency policies.

"No, we don't have to", Mr Trump said when asked whether he plans to devalue the greenback, though he added that if the Federal Reserve were to cut interest rates, it "would automatically bring down the dollar a little bit", relieving pressure on exporters.

Inside the White House, hawks have been pushing for a direct intervention in currency markets by the Treasury by pointing to a slowdown in US manufacturing, which many economists have blamed on tariffs imposed by Mr Trump and uncertainty surrounding his trade war with China.

Speculation has been building among strategists that US may intervene to forcibly weaken the dollar. The risk of US action rose further in the eyes of some analysts last week after the yuan plunged to a decade-low and the Trump administration formally named China a currency manipulator.

Trade negotiators are currently scheduled to meet again in Washington next month. But Mr Trump, speaking on Friday, said the talks could be cancelled amid the recent escalation.

"We'll see whether or not we keep our meeting in September," Mr Trump said. "If we do, that's fine. If we don't, that's fine."