BEIJING - China's market regulator said on Monday (March 11) that food and drug safety standards still fall way short of the needs of the masses and long-term efforts must be put in to ensure consumers have peace of mind.

"Our current and future work needs to focus on food, drugs, children's products, and elderly products, areas that the public cares most about, and could (potentially) cause the most harm," he told reporters on the sidelines of China's annual parliamentary meeting.

China has been plagued by food and drug scandals in recent years. Last July, a major scandal involving hundreds of thousands of children nationwide being injected with defective vaccines for rabies, and diphtheria and tetanus erupted, causing widespread anger among parents. And late last year, more than a hundred children were found to have been given expired polio vaccines in eastern Jiangsu province.

To this, Ms Jiao Hong, head of the National Drug Administration of China, said at the same press conference that "China's vaccines, on a whole, are safe", urging the public and the media not to lose confidence in domestically-made vaccines.

She pledged more stringent oversight of the sector, and noted that a new draft law on vaccine management is underway. 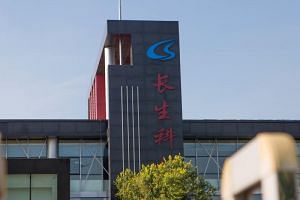 The draft law proposes severe punishment for errant vaccine makers and investigations into inspectors who fail in their duties.

He noted that a new party regulation has been rolled out to hold the officials directly responsible for lapses in food safety.

While errant enterprises have to bear the main responsibility, local party and government leaders must be the first to answer for any food safety problems that occur in regions under their charge, he said.

"The goal of our future reforms is to ensure that the companies bear the main responsibilities and have the scope of their self-declaration expanded.

"As for the benefits of these health products, we will leave it to the market and consumers to determine, and cut down on evaluation by the government," he added.