Tibet may be best known for its ancient monasteries and breathtaking mountains, but tourists may soon be able to see a whole new side of the highland plateau.

Alpine safaris, glacial walks and even horse rides alongside local nomads are among some of the ideas being considered, as the Chinese government aims to showcase Tibet's full range of natural and cultural resources so that tourism becomes a key pillar of its economy in the future.

"In terms of policy, projects and funding, we will set up various supporting mechanisms so as to establish tourism as the leading priority industry of the Tibetan Autonomous Region (TAR)," deputy party secretary and TAR chairman Qi Zhala said at a week-long tourism summit last Saturday.

Tourist arrivals to Tibet have boomed in recent years, with year-on-year growth of almost 20 per cent. The autonomous region saw 20 million tourists in 2015, and the authorities expect this figure to exceed 30 million this year.

Tourism already accounts for close to a third of Tibet's gross domestic product, but Mr Qi said the challenge now is to transform the sector into a "distinctive, premium and high-quality" one able to attract tourists with higher spending power while drawing attention to some of the region's lesser-known gems.

These include the Yarlung Tsangpo Grand Canyon, which is deeper and larger than its better-known American cousin, and Yigong Lake, which is near one of the world's highest tea plantations at 2,240m above sea level.

The government will also look at ways to boost sports and aerial tourism, he added. To this end, the TAR government will launch angel investment funds to encourage entrepreneurship and open up the tourism sector to private entities, although it is unclear whether such policies will benefit local Tibetans as much as Chinese businesses and well-resourced state-linked firms. 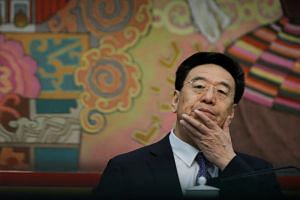 Along Norbulingka Road in downtown Lhasa, shopkeepers said not a single business in the area is Tibetan-owned.

"It's not that they aren't business savvy, but Tibetans prefer starting businesses within and supporting their own communities," said Ms Chao Jihua, 43, who runs a 17-year-old hardware store on the street.

With Tibet still one of China's poorest regions, the government is focused mainly on using tourism to reduce poverty among ethnic Tibetans, who make up about 90 per cent of the autonomous region's population. Some 125,000 farmers benefited directly from Tibet's tourism sector last year, said officials, with an annual income of at least 12,000 yuan (S$2,400).

While acknowledging that many of Lhasa's businesses are run by Chinese people from outside Tibet, TAR government information office director Jigme Wangtso said there are many Tibetan-owned firms in various sectors including tourism, without providing figures.

"Our funding policies (to encourage new startups in tourism) are transparent and fair," he said. "It's a misconception to think most of the businesses in Tibet are owned by Han Chinese."

But even as officials have proclaimed the goal of turning Tibet into a global tourist destination, significant hurdles still exist.

Despite the tourism boom, the proportion of foreign tourists has yet to recover from what it was a decade ago. Unrest roiled the autonomous region in 2008 after demonstrations to mark the anniversary of a failed 1959 Tibetan uprising against Chinese rule turned violent.

In 2006, foreign tourists made up 6 per cent of visitors to Tibet, while last year they were just 1.3 per cent of total arrivals. Foreigners who want to visit Tibet have to apply for a special travel permit, which can only be obtained by booking a tour through a registered travel agent.

Asked whether such restrictions may eventually be relaxed, TAR party committee standing committee member Bianba Zhaxi said that Tibet's opening up to the outside world is an important policy set by the Chinese government and an inevitable trend.

For shop owners such as Ms Chao and Mr Chen Congjie, who sells speciality Tibetan products such as yak jerky, an influx of well-heeled foreign tourists remains a dream.

"Of course I'm supportive of these new plans that are meant to bring in more tourists, but my business has not benefited much from the supposed rise in tourists in the last few years," said Mr Chen, 48, a Qinghai native. "My hope is that more foreign tourists will come to Tibet, and spend money at small businesses like mine."