China means what it says and will enforce deals it makes, Premier Li Keqiang has stressed as US trade negotiators arrived in Beijing for a new round of trade talks.

Despite a tariff stand-off and substantial differences that still have to be ironed out before a trade deal can be reached, Mr Li told business leaders gathered at the annual Boao Forum for Asia that he was hopeful that China and the United States would arrive at an agreement.

At a round-table discussion yesterday, US Chamber of Commerce executive vice-president Myron Brilliant said the US-China relationship is at a pivotal moment "where trust is at a deficit" and cooperation has to be strengthened.

While confident that a trade deal will be reached, Mr Brilliant urged Mr Li to ensure that there is follow-through. "The implementation will be critical: The deal is important, but it's the steps that follow the deal, how the deal gets implemented on both sides," he said.

One of the main stumbling blocks to a successful negotiation so far has been the lack of trust between both sides. The US has demanded that there be an enforcement mechanism to ensure that China sticks to its commitments, while Beijing has said that any mechanism must be fair and equal and apply both ways.

US President Donald Trump said last week that he intends to maintain tariffs on billions of dollars of Chinese imports until he is sure Beijing is complying with any eventual trade agreement.

Mr Li disagreed that there was a trust deficit in the bilateral relationship, even though "probably in some aspects, we have problems in trust".

After four decades of China-US relations, both countries should be mature enough to honour their commitments to each other, he said.

Mr Li said relations with the US will likely face new twists and turns in the future - just as there were many over the past four decades - but that the relationship has always kept moving forward, and progress has always prevailed over difficulties.

"Once we have a deal, both sides need to properly implement it (and) if there are problems in the process of implementation, then we can find solutions acceptable for both sides," he said. "The most important objective is to enforce the deal and to continue to move forward our bilateral relationship."

Mr Li said relations with the US will likely face new twists and turns in the future - just as there were many over the past four decades - but that the relationship has always kept moving forward, and progress has always prevailed over difficulties. "When there is an agreement, there is no reason not to enforce it," he reiterated. 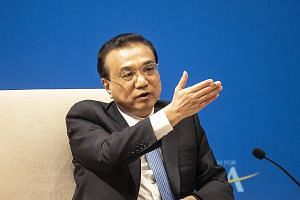 "But there is still a large amount of work remaining," he said at a regular press briefing, adding that both sides are "going all out to earnestly negotiate", following the truce struck by President Xi Jinping and Mr Trump last December.

US and Chinese officials had a working dinner last night and a full day of talks today, Mr Gao added.

Reuters reported that China has put forward proposals that went further than in the past, including on technology transfer, citing a senior US official.