BEIJING - China and Singapore’s relationship is not personal to any particular leader, and both countries want ties to stay warm even after a new prime minister takes over, PM Lee Hsien Loong has said.

Singapore has been preparing for a transition for a long time, getting younger ministers to actively engage China on various bilateral platforms, said PM Lee, his comments coming at a time when preparations are being made for a successor to take over at the helm.

"I hope that this (leadership transition) will go smoothly, and I think that the Chinese side very much wants the relationship and the friendship to continue. It's in the interest of both countries, it's not personal to a few or to particular leaders," he said.

PM Lee was speaking to Singapore reporters in an interview to wrap up his five-day visit to the Chinese capital, where he attended the second Belt and Road Forum.

On Monday (April 29), he met China's top two leaders - President Xi Jinping and Premier Li Keqiang - and witnessed the signing of five deals between both countries. 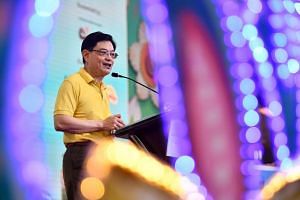 Singapore’s Cabinet reshuffle: An interactive look at the key changes

PM Lee was responding to a question on how the leadership transition would affect bilateral ties, when he noted that younger ministers such as Mr Heng, Mr Chan Chun Sing, Mr Lawrence Wong, Mr Desmond Lee and Ms Indranee Rajah among others have been actively engaging with China, on both the provincial-level as well as on the apex bilateral platform, the Joint Council for Bilateral Cooperation (JCBC).

He also added that Singapore has told China that Mr Heng would be taking over as co-chair of the JCBC from Mr Teo.

"The Chinese side have said yes - they welcome this, they know him because he has interacted with them on many occasions, including when President Xi and Premier Li came to visit Singapore and he was the accompanying minister. So they have a direct feel of him," said PM Lee.

He also said that as DPM, Mr Heng would have to take on more leading roles in the next general election, which has to be called by early 2021.

"He is taking on as DPM. He is not just a minister, but also carrying more of the political responsibilities, and that means setting the agenda, that means pitching the Government's stance and policies to the public, that means building the younger team, and being ready in all respects to take over from me and my older ministers as soon as possible," he said.

He also reiterated his intention to hand over his post to his successor by the time he turns 70 in 2022.

Turning to the Belt and Road Forum, which he attended for the first time, PM Lee said that various leaders shared how they would like to cooperate with China under the Belt and Road Initiative (BRI), and Singapore had made suggestions on how the project can take a more sustainable approach going forward.

The BRI is China's mega plan to build a network of ports, railways, roads and trading hubs linking the country to Europe, Africa and other parts of Asia.

Mr Xi had pledged during the forum to make the BRI a project that is clean, green, and financially sustainable, hitting back at international criticism of his signature policy.

On this, PM Lee said: "It's the right objectives to aim for. Of course, the critical thing is to see them implement it in the actual projects which come to fruition."