The world's two largest economies have reached consensus on some issues in their trade dispute and will continue negotiations on outstanding areas, signalling that a full-blown trade war could be avoided.

During their two days of talks in Beijing which ended yesterday, China and the United States "had thorough exchange of views on issues including increasing US exports to China, bilateral service trade, two-way investment, protection of intellectual property rights, as well as resolving tariff and non-tariff issues, reaching consensus in some areas", said state news agency Xinhua.

But "given that considerable differences still exist on some issues, continued hard work is required for more progress", it added.

Going forward, both sides will "stay in close communication on relevant issues and establish a corresponding work mechanism".

It is unclear what the two countries have agreed on and what are the contentious issues that have been left unresolved.

It appeared that the US team left last evening without a deal to significantly cut the country's trade deficit with China, which reached US$375 billion (S$500 billion) last year, and stop "unfair trade practices" such as forced technology transfers.

The high-powered US delegation led by Treasury Secretary Steven Mnuchin arrived in Beijing on Thursday to soothe trade tensions after both sides threatened to slap additional tariffs worth billions of dollars on each other's goods.

China, US reach some deals in trade, differences remain

The team had reportedly given the Chinese side headed by Vice-Premier Liu He a long list of demands ahead of the talks, including one that requires Beijing to cut the trade gap by US$200 billion by the end of 2020.

The US also demanded that China stop intellectual property thefts, cease state subsidies for high-tech industries as part of the Made in China 2025 plan, and refrain from retaliating against US trade actions.

Analysts say that the demands are too high and predict that negotiations could drag on for the next several years.

"It is impossible to imagine China acceding to these demands, but they are best seen as the first, inflated, bid in a negotiating process," said Bank of Singapore chief economist Richard Jerram.

"Irrespective of any short-term deal, which is fundamentally unpredictable, trade friction will be a permanent feature of the next few years," Mr Jerram added. 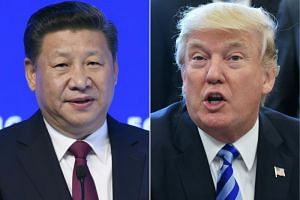 For Sino-US expert Jin Canrong, the agreement to continue talks means that a trade war has essentially been averted, which is a win for China.

"Continuing talks is beneficial to China. It is a very patient country - it doesn't mind continuing talking for the next three to five years," said Professor Jin, associate dean of the School of International Studies at Renmin University of China.

"By then, it would have developed the technology that the US refuses to let it access," he said, in reference to the US ban on the exporting of chips and software to Chinese telecom equipment firm ZTE for seven years.

Yesterday, China's Commerce Ministry said it had made "solemn representations" to the US delegation on the case.

"The US side said they attach importance to China's representations and will report China's stance to the US President," the ministry said.

A version of this article appeared in the print edition of The Straits Times on May 05, 2018, with the headline 'China, US reach consensus on some issues in trade dispute'. Subscribe
Topics:
More
Whatsapp Linkedin FB Messenger Telegram Reddit WeChat Pinterest Print Purchase Article Copy permalink