The University of Science and Technology of China on Friday (April 15) unveiled an eye-catching robot named "Jiajia".

Although the robot itself is not a huge leap technologically, it is designed to mimic human interactions.

In a meeting with Chinese media on Friday, Jiajia told them not to get too close when taking a picture as it will "make my face look fat", Xinhua news agency reported.

Dubbed a "robot goddess" by its creators, Jiajia has long flowing locks and makeup like a human.

It took the team three years to complete the robot, which can also show micro-expressions and move its lips and body. It also has high-tech functions like Global Positioning System and is capable of connecting to cloud services.

During the unveiling, lead designer Chen Xiaoping greeted the humanoid, which responded with: "Hi, master. Is there anything I can help you with?"

Is she nice? China's first interactive robot can respond to human orders, make micro facial expressions and do morehttps://t.co/MLs5TS5Jj7

Chen and his team were also the masterminds behind the service robot "Kejia", which won first place at the RoboCup championship in 2014. 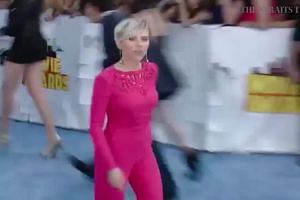 On Jiajia, Chen said: "We hope to develop the robot so it has deep learning abilities. We will add facial expression recognition and make it interact more deeply with people."

He added that his latest creation was "priceless" and the team would not consider mass production yet.

Jiajia will be on show at the 2016 China International Technology Fair in Shanghai from April 21 to 23.

It is not the first robot built to resemble a woman. Recently, a robot that looked like actress Scarlett Johansson made its debut in Hong Kong.