BEIJING (Reuters) - The China-led Asian Infrastructure Investment Bank (AIIB) will be different from institutions like the World Bank because it has a greater understanding of the developing world's needs, officials said on Sunday (June 26) at its first annual meeting.

Chinese President Xi Jinping proposed the bank two years ago and it began operations in January, with 57 founding member countries and $100 billion in committed capital, which it plans to invest in projects across the region.

The AIIB, which intends to invest US$1.2 billion (S$1.62 billion) this year, has said it is aiming to meet international standards of governance, though some members say there is still work to be done. 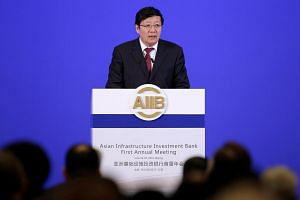 The AIIB's board approved its first four deals worth US$509 million on Friday, with three projects co-financed with the World Bank, the Asian Development Bank, the United Kingdom Department for International Development and the European Bank for Reconstruction and Development.

The co-financed projects are a slum renovation in Indonesia and highway construction in Pakistan and Tajikistan. A power grid upgrade project in Bangladesh will be solely AIIB financed.

AIIB President Jin Liqun said it was the focus on infrastructure that specifically marked out the bank as different and that they were committed to the concept of international best practice.

"So our bank would like to have the development experience, the so-called international best practice, reflecting the experience of China, India (and) so many countries in Asia. So we should have a different model of development."

The AIIB is also looking to expand its numbers this year and will take applications for new members through the end of September.