The move would further monitor and ensure the safety of young pupils, security and educational quality, the Ministry of Education said on Tuesday (Feb 6).

The ministry will strengthen its supervision over preschools and kindergartens to deal with high tuitions fees, insufficient access to good public kindergartens and safety issues, Mr He Xiuchao, director of the ministry's Education Supervision Bureau, said at a news conference.

Director Tang Lijun of Beijing's educational supervision office said at the conference that the city will intensify the training of supervisors sent to kindergartens to ensure preschool pupils' safety.

"Beijing is working on a comprehensive evaluation system over the city's kindergartens, which is expected to be released and implemented in the first half of 2018," Mr Tang said.

The system will take charge of student admissions as well as the grading and overall quality improvement of the city's kindergartens, he added.

In November, reports of children at an RYB Education preschool being poked with needles and mal-treated by a 22-year-old female teacher caused a public outcry. 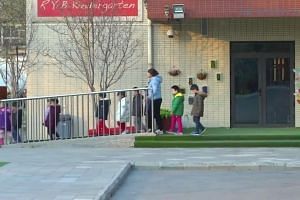 Head of Beijing kindergarten embroiled in abuse scandal has been fired

"If such instances of child abuse could happen at high-end education facilities in the most international and developed city in China, what could have happened to the children living in second-tier cities and even in remote areas," one netizen wrote on microblog platform Sina Weibo.

On Nov 25, the teacher, surnamed Liu, was sent to criminal detention, according to police.

The Beijing Municipal Education Commission later sent hundreds of permanent supervisors to the city's kindergartens to inspect their education quality. The supervisors being assigned to each kindergarten had their personal information including names and phone numbers made available to the public.

Professor Li Guoqiang at Xiamen University, in Fujian province, said China has seen a surge in the number of its kindergartens and preschools in recent years as the country intensifies efforts to popularise early education.

"Problems are inevitable as lots of these schools are privately owned and lack supervision," Prof Li said.

Local educational authorities should make the conditions of each kindergarten within their jurisdiction public so that parents have access to more information before sending their children off to school, he added.

Efforts have also been made to strengthen supervision of the country's primary and secondary schools.

China has more than 120,000 supervisors monitoring every aspect of the country's 260,000 primary and middle schools and 98 per cent of these schools are equipped with supervisors, said Mr He.

There are 19,500 full-time and 103,800 part-time supervisors, who are mainly school principals, exemplary or retired teachers and parents, he added.