China will also further open up its manufacturing sector, including the auto industry, while reducing its negative investment list that restricts foreign investment in some areas, Mr Li told the World Economic Forum in the north-eastern Chinese port city of Dalian.

Beijing's signal that it is quickening the pace of opening up came after the presidents of China and the United States agreed over the weekend to restart trade talks in another attempt to strike a deal and end a bruising tariff war.

But analysts doubt the ceasefire will lead to a sustained easing of tensions, and warn lingering uncertainty could dampen corporate spending and global growth.

"We will achieve the goal of abolishing ownership limits in securities, futures, life insurance for foreign investors by 2020, a year earlier than the original schedule of 2021," Mr Li said.

China is moving forward the schedule to show the world that it will not stop opening up its financial sector, Mr Li said, adding the government will also reduce restrictions next year on market access for foreign investors in the value-added telecommunications service and transport sectors.

On Sunday, China cut the number of sectors subject to foreign investment restrictions, a widely expected move, to 40 from 48 in the previous version, published in June last year. 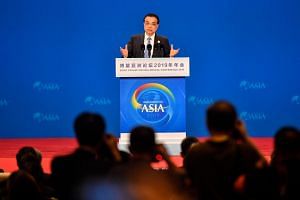 On Saturday, leaders of the Group of 20 major economies warned of growing risks to the global economy but stopped short of denouncing protectionism, calling instead for a free and fair trade environment after talks which some members described as difficult.

Echoing the sentiment, Mr Li said protectionism is rising, but did not make references to specific economies.

"In the face of pressure from a slowing global economy, I believe people are all in the same boat. We should promote the spirit of partnership, carry out equal consultations, seek common ground while reserving differences and manage and control disputes," Mr Li said.

Fallout from the dispute is spreading. Business surveys this week showed factory activity shrank in China and much of the rest of Asia last month, as well as in Europe, while manufacturing growth cooled in the US, keeping pressure on policymakers to shore up growth.

Rising worries over global growth have compelled some central banks, such as those in Australia, New Zealand, India and Russia, to cut interest rates.

"Currently, global economic risks are rising somewhat, international investment and trade growth is slowing, protectionism is rising and unstable and uncertain factors are increasing," Mr Li said. "We should actively cope with this. Some countries have taken measures including cutting interest rates, or sent clear signals on quantitative easing."

But China will not resort to competitive currency devaluation, Mr Li said, and will keep the yuan exchange rate basically stable at a reasonable and balanced level.

China is likely to hit its economic growth target of 6 per cent to 6.5 per cent this year provided the trade dispute with the US does not worsen, and hence will not need "very big" stimulus measures to prop up growth, a central bank adviser said on Monday.

• China will remove caps on foreign ownership of brokerages, futures dealers and life insurers by next year, a year ahead of the previous plan.

A version of this article appeared in the print edition of The Straits Times on July 03, 2019, with the headline 'China to hasten opening up of financial sector'. Subscribe
Topics:
More
Whatsapp Linkedin FB Messenger Telegram Reddit WeChat Pinterest Print Purchase Article Copy permalink