Now, Beijing is starting to tap the brakes.

The value of the deals that Chinese companies are striking under the country's big global plan - called the Belt and Road Initiative - is smaller than a year ago, according to new data. Chinese officials themselves are sounding a cautious note, voicing worries that Chinese institutions need to be careful how much they lend under the programme - and make sure their international borrowers can pay it back.

"Current international conditions are very uncertain, with lots of economic risks and large fluctuations for interest rates in newly emerged markets," said Hu Xiaolian, the chairwoman of the Export-Import Bank of China, a state-controlled lender that plays a big role in financing the projects, at a forum this month in Shanghai.

"Our enterprises and Belt and Road Initiative countries will face financing difficulties."

China has begun a broad, interagency review of how many deals have already been done, on what financial terms and with which countries, say people close to Chinese economic policymaking, who asked to speak on the condition of anonymity because the effort has not been made public.

American and European officials have long worried that Belt and Road represents a diplomatic and economic power grab by Beijing, fuelled by its vast government wealth and helped by the Communist Party's laserlike focus on achieving long-term goals.

Under the initiative, Chinese government-controlled lenders offer big chunks of money - usually through loans or financial guarantees - to other countries to build big infrastructure projects like highways, rail lines and power plants. That money often comes with the requirement that Chinese companies be heavily involved in the planning and construction, throwing them a lot of business. 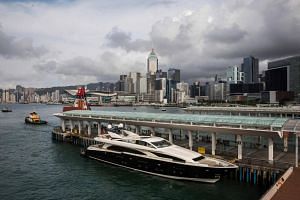 China to rely even more on Belt and Road, Greater Bay Area, amid trade spat with US

But even with its financial firepower, China has its limits. Its economy is showing signs of slowing, and it is in the middle of a trade war with the United States.

Too much overseas activity risks creating wasteful white elephants that can drag down Chinese companies and local partners alike. All types of deals are now angling to be associated with the Belt and Road Initiative like a theme park in Indonesia and brewery in the Czech Republic.

Further, profligate lending can worsen relations with other countries rather than help them. New governments in places like Malaysia and Sri Lanka have questioned why their predecessors borrowed so much from Beijing.

This year, some Chinese officials have expressed some concerns about lending under the programme.

"Ensuring debt sustainability - that is very important," Yi Gang, the new governor of China's central bank, said at a conference in Beijing in late April.

While Belt and Road activity remains huge, it has certainly become more restrained, according to official data. In the first five months of 2018, Chinese companies signed contracts worth US$36.2 billion in business, down nearly 6 per cent from the same period a year ago.

Deal signings were down at this time last year from 2016, too, though by a lesser magnitude. Much of that downturn stemmed from big companies and governments' saving their powder for a major Belt and Road forum held in May 2017 in Beijing that was attended by Xi Jinping, China's top leader, President Vladimir Putin of Russia and other major political figures. After the forum, activity surged.

"I sensed that the level of enthusiasm about BRI had certainly shifted down a few notches relative to last year," said Eswar Prasad, a Cornell economist and former head of the International Monetary Fund's China division who recently visited Beijing and had extensive conversations with Chinese financial policymakers.

Project activity could pick up later this year, of course. But an uncertain global economic outlook has given Beijing even more reasons to be cautious.

Belt and Road lending seemed a sure thing when the effort began under Xi in 2013. Loans would be long-term, giving borrowers time to pay them back. China also tends to extend loans mainly to countries with significant natural resources. If a resource-rich developing country had trouble repaying its loans, it could offer goods like oil, iron ore or even food instead.

But part of the problem now is that no one - not even the Chinese government - has a comprehensive picture of the lending so far. The Finance Ministry and the state-controlled banking system have poured money into projects from the Czech Republic to Laos, and from South Africa to Kazakhstan.

The China Banking and Insurance Regulatory Commission estimated this spring that Chinese banks had lent US$200 billion for 2,600 projects.

Various government agencies have also issued extensive export guarantees, loan guarantees and other financial arrangements as part of the initiative, although some of these overlap with the bank loans.

A Belt and Road slowdown may also be natural. Official data show Chinese companies are completing projects at nearly the same pace as they are signing deals for new ones, suggesting the initiative may simply be settling into a sustainable rhythm.

"They are still very actively promoting Belt and Road," said Andrew Mackenzie, the chief executive of BHP Billiton, an Australian mining giant that is among the biggest exporters of iron ore to Chinese steel mills, which are among the intended beneficiaries of Belt and Road.

Still, some Chinese officials are looking more closely at where the money is ending up.

For example, they have been reassessing the country's financial exposure in Africa, a continent with immense natural resources that has lured a wide range of Chinese energy and construction companies, people close to Chinese policymaking said.

Belt and Road has been viewed with increasing skepticism by multilateral institutions as well. They have warned that developing countries should not incur excessive debts.

"The first priority," Christine Lagarde, the managing director of the International Monetary Fund, said at the Beijing conference in April, "is that Belt and Road only travels to where it is really needed."