Chinese leader does not rule out military option, even as he promises more growth opportunities for the island

Taiwan's reunification with China is inevitable and will bring greater stability to the Asia-Pacific region and the world, President Xi Jinping said yesterday as he promised more opportunities for the estranged territory in China's growth and a one-country-two-systems model that guarantees its rights.

In his first major speech for the new year, President Xi gave a definitive outline of the future of China-Taiwan relations, assuring the Taiwanese their rights and interests would be protected, while appealing to their emotions as ethnic Chinese who should rightfully be bonded to the motherland.

Reunification has always been "an unshakable historical task" since the Kuomintang-led government withdrew to Taiwan in 1949 after losing the Chinese civil war, he said.

"The motherland must be unified, and will be unified. This is the conclusion drawn over 70 years of development in cross-strait relations and an inevitable requirement of the great rejuvenation of the Chinese nation in the new era," he said in an address to government officials and military officers at the Great Hall of the People.

The event was to mark 40 years since China proposed ending military confrontation with Taiwan and seeking reunification through dialogue, after establishing diplomatic relations with the United States in 1979.

President Xi has taken steps to unify the two lands since becoming China's leader in 2012.

He met then Taiwanese President Ma Ying-jeou in Singapore in 2015 in the first meeting between leaders of both sides since the civil war ended.

The motherland must be unified, and will be unified. This is the conclusion drawn over 70 years of development in cross-strait relations and an inevitable requirement of the great rejuvenation of the Chinese nation in the new era.

But after Ms Tsai Ing-wen led the pro-independence Democratic Progressive Party to power in Taiwan in 2016, President Xi has been exerting pressure on the territory by cutting contact with its government and goading countries to break diplomatic ties with the island.

Yesterday, in a message directed seemingly at the US and pro-independence advocates, he made clear China will not tolerate foreign meddling and separatists, and will turn to military power, if necessary.

"We do not promise to renounce the use of force and reserve the option of taking all necessary measures, targeting external interference and a very small number of 'Taiwan independence' separatists and their separatist activities, not against Taiwan compatriots," he said.

President Xi acknowledged the difference in the political systems of China and Taiwan, but dismissed it being an obstacle, saying the one-country-two-systems model will ensure the "social systems and lifestyles of Taiwan compatriots will be fully respected". 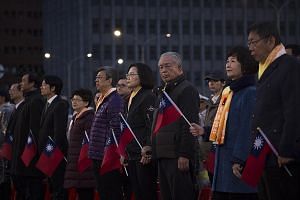 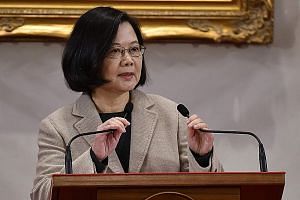 "Chinese people do not fight Chinese. We are willing to strive for the prospect of peaceful reunification with the utmost sincerity and the best efforts because achieving reunification through peaceful means is most beneficial to the compatriots on both sides of the strait and the entire nation."

Dr Hoo Tiang Boon, a cross-strait relations expert at the S. Rajaratnam School of International Studies, said putting the military option on the table was necessary for President Xi, who faces internal pressure over Beijing's handling of the trade dispute with the US.

"Taiwan is one of the issues that his internal critics could come at him with, and the last thing he probably wants is to be criticised for being soft on Taiwan. (Taking a hard line) is almost an obligatory part of his speech," said Dr Hoo.

Apart from keeping up the pressure on the Tsai administration, President Xi's speech was also a warning to the US, which China worries will leverage the Taiwan issue to force more concessions from the Chinese.

"The message, in terms of broader China-US relations, is that all things can be discussed but Taiwan is certainly off-limits."