China firmly opposes foreign interference in Hong Kong affairs and will never tolerate attempts by others to undermine its national sovereignty and security, as well as Hong Kong's prosperity and stability, said the Commissioner's Office of China's Foreign Ministry in the city.

The office said yesterday that "any collusion by forces in and out of Hong Kong to destabilise the city and damage people's interests is doomed to fail".

The comments came after reports said United States Vice-President Mike Pence and Secretary of State Mike Pompeo met Beijing critic and Apple Daily founder Jimmy Lai, and that they had discussed developments related to the amendments of Hong Kong's now-aborted extradition Bill and the status of the city's autonomy under the "one country, two systems" framework.

"It is evidently out of ulterior motives that US senior officials have lined up to meet someone like Lai when the situation in Hong Kong remains delicate.

"We deplore and firmly oppose such acts that have conveyed a seriously wrong signal," the Commissioner's Office said.

It said it had made stern representations to the US consulate-general in Hong Kong and urged the US to immediately stop its erroneous remarks and actions, and avoid going further down the wrong path.

Separately, the Chinese military commander responsible for Hong Kong has assured a Pentagon official that the Chinese army will not interfere in the city's affairs - an apparent signal that troops will stay in their barracks amid renewed political upheaval, Reuters reported. 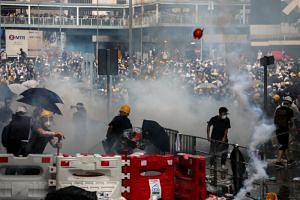 China to Britain: Keep your 'colonial' hands off Hong Kong

Major-General Chen Daoxiang was speaking at the start of a meeting last month with Mr David Helvey, principal deputy assistant secretary of defence for the Indo-Pacific Security Affairs, according to people briefed on the discussion.

The report said the two men met when Mr Helvey made a courtesy call at the People's Liberation Army (PLA) Hong Kong headquarters on June 13 - just metres from where a day earlier, police clashed with protesters seeking to stop the passing of the extradition Bill that would allow people to be sent to mainland China for trial.

"Maj-Gen Chen made it clear from the outset that the PLA would not breach their long-standing principle of non-interference in Hong Kong affairs," a source briefed on the discussions told Reuters.

"It was surprising because he took it upon himself to raise it. It was a clear signal, coming at a sensitive time," the source added.

A US defence official, speaking on condition of anonymity, confirmed Maj-Gen Chen and a senior Pentagon official met.

The role of the PLA in Hong Kong has long been one of the most sensitive elements of the handover from British rule - and a presence closely watched by activists and foreign diplomats.

There have been fears in the city that the troops could be unleashed to quell violence, but police chiefs have insisted that their forces can maintain order.

The city's Basic Law states that Hong Kong can ask the garrison to help maintain public order, but "they shall not interfere in local affairs" and must abide by local laws.

Foreign envoys estimate the Hong Kong garrison to have between 8,000 and 10,000 troops in bases on both sides of the border. It includes a small naval and air force detachment.

The PLA occupies bases formerly used by the British across the territory, including several prime sites on Hong Kong Island and across the harbour in Kowloon.