BEIJING (BLOOMBERG) - China warned that the United States and its Asia-Pacific allies risked countermeasures if they accepted the deployment of intermediate-range American missiles, singling out Australia, Japan and South Korea.

China's foreign ministry said in a statement late Monday (Aug 5) that the country "will not sit idly by" in response to such threats, urging the US to avoid escalating tensions.

A ministry official separately told the Associated Press and other news organisations on Tuesday that the trio of allies should "exercise prudence" and that the deployment of such weapons would "not serve the national security interests of these countries".

The comments underscore the difficulty facing the Trump administration's effort to counter China's own missile capabilities in the region after formally withdrawing last week from its Intermediate-Range Nuclear Forces Treaty with Russia.

Any country that accepts the missiles risks diplomatic and economic retaliation from Beijing - and all three US allies mentioned count China as their largest trading partner.

Australian Prime Minister Scott Morrison ruled out hosting US missile bases on Monday, after US Defence Secretary Mark Esper said he was in favour or deploying American missiles in Asia within months.

"China will not just sit idly by and watch our interests being compromised," Foreign Ministry spokeswoman Hua Chunying said in a statement.

"What's more, we will not allow any country to stir up troubles at our doorstep. We will take all necessary measures to safeguard national security interests."

Fu Cong, director of the ministry's arms control department, also said the US move would have a "direct negative impact on the global strategic stability," the AP reported, citing a briefing with the official. He mentioned Australia, Japan and South Korea by name. 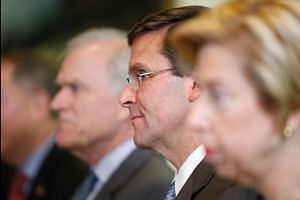 US Pentagon chief says in favour of placing missiles in Asia

The 1987 INF treaty required the US and Russia to never deploy ground-based ballistic and cruise missiles with a range of 500 to 5,500 kilometres (about 300 to 3,500 miles) - either nuclear or conventional. The Trump administration formally withdrew after complaining about violations by Russia and a desire to include China in a new accord.

While China can target several American allies and territories with intermediate missiles deployed on its own shores, the US's own options are limited to allies and the tiny territory of Guam.

Hua, the foreign ministry spokeswoman, said that any US deployment outside of its own borders will show "its aim will apparently be offensive".

The Global Times, a nationalist newspaper published by China's Communist Party, said the US risked "geopolitical chaos" with any deployments.

"Its impact will be much more serious than that of the Terminal High Altitude Area Defence in South Korea, because intermediate-range missiles are undoubted offensive weapons," the paper said in an editorial published on Sunday.

"Any country accepting US deployment would be against China and Russia, directly or indirectly, and draw fire against itself."