BEIJING (Reuters) - China and Africa are "good brothers" and China respects all people regardless of race, the government said on Monday (May 30) after a detergent maker apologised for an advert showing a black man bundled into a washing machine that many called racist.

Foreign Ministry spokesman Hua Chunying said the ad was an isolated commercial act that had not prompted any diplomatic complaints and hoped people would not hype it up.

"Everyone can see that we are consistent in equality towards, and mutually respect, all countries, no matter their ethnicity or race. In fact, we are good brothers with African countries," Ms Hua told a daily news briefing. 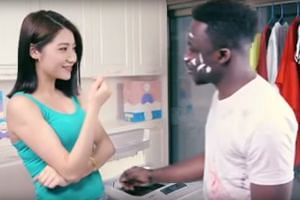 In the television advertisement for Qiaobi laundry detergent, a black man wolf-whistles at a Chinese woman, who beckons him over. She then stuffs a packet of detergent in his mouth and shoves him head-first into a washing machine. A moment later, the woman opens the lid and a fair-skinned Asian man pops out.

State media reported the ad had first appeared in April but went viral after being posted on YouTube last week, where it racked up millions of views within a few days. Some Chinese and foreign internet users condemned it as racist. "We express our sincere apologies and sincerely hope that the many internet users and the media will not read too much into this," Shanghai Leishang Cosmetics, the company that owns the Qiaobi brand, said in a statement at the weekend.

The company deleted an online version of the ad in response to the outcry, the state-backed Global Times reported, citing an interview with the firm. However, versions of it could still be seen on Chinese and foreign video platforms, including YouTube, on Monday.

It is unclear if the black actor in the ad is from Africa.

Public discussion of racial discrimination is unusual in China, which is dominated by the ethnic Han majority but is also home to dozens of minority groups as well as a growing influx of foreign residents, including Africans.

"Even though the people who shot the ad may not have realised it, it really is racist," one user on the microblogging platform Weibo wrote. "Those who planned the ad strategy should really have read up first."

Government officials often insist that China enjoys largely harmonious ethnic relations, though tension has led to violence, particularly in its western regions of Tibet and Xinjiang, which have large minority populations.

The Global Times, a popular tabloid known for a nationalistic bent, said in an editorial Western media coverage was "too extreme" and China had no problems with discrimination.

"There have been many evils during the development of the West in this era, and racism is one of them," the paper said."China's social process hasn't been the same experience, so using the same yardstick to measure China's performance will lead to results that are inevitably absurd."