Admiral warns against provocations; Asean, China 'quite capable of ironing out any differences'

China does not "make or fear trouble", a top Chinese military official said yesterday, as he warned against the "provocations of certain countries for their own selfish interests".

The territorial spat over the South China Sea once again dominated the Shangri-La Dialogue, in what was becoming a geopolitical competition.

Admiral Sun Jianguo, deputy chief of general staff of the People's Liberation Army, said China and Asean are perfectly capable of working together to preserve peace and stability in the waterway and iron out any differences through consultation.

"Any countries that are not directly concerned are not allowed to sabotage our path of peace for their selfish gains," he said at the security summit, which ended yesterday. The three-day event was organised by the London-based International Institute for Strategic Studies. 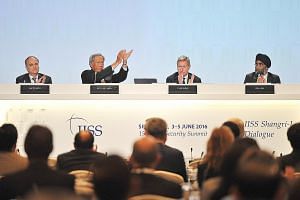 Admiral Sun spoke for half an hour in a speech that did not explicitly refer to the US when criticising interference in the disputes.

Dr Jonathan Pollack, a senior fellow at the Centre for East Asia Policy Studies at the US-based Brookings Institution, said that by not referring to the US, China signalled that it did not want to "let what are obviously strong bilateral differences to get so injected into the conversation that it makes any reasonable or reasoned discussion impossible".

Last Saturday, US Defence Secretary Ashton Carter had warned that China's actions in the South China Sea were putting it at risk of "erecting a Great Wall of self-isolation".

Admiral Sun yesterday rejected this notion, saying many countries have been "warmer and friendlier to me, and respect and trust me more" as compared with last year, when he also attended the summit.

He also said escalating tensions in the South China Sea were because of threats and military exercises by "some big countries", and that the levels of threat meant China needed military defence there.

Admiral Sun also lashed out at the Philippines for initiating a case against China at the Permanent Court of Arbitration in The Hague, saying it was in breach of a bilateral agreement and in violation of international law.

China has said that it will reject the ruling, which is expected in weeks.

Asked how China will respond to Philippine President-elect Rodrigo Duterte's desire to resume bilateral talks with China, Admiral Sun said he hopes Mr Duterte "can shake off the burden of the last administration and remove the obstacle to bilateral development".

The disputes in the East and South China seas have caused concern beyond the region, with Canada's Minister for National Defence Harjit Singh Sajjan saying that, as a Pacific power, it wants to contribute to regional maritime security.

French Defence Minister Jean- Yves Le Drian said he will make a proposal to his European Union counterparts to coordinate patrols in Asian waters in defence of international law.

Professor Huang Jing, from the Lee Kuan Yew School of Public Policy, said: "The Asia-Pacific has become the centre of gravity not just for economics but also for security, diplomacy and politics."

He added: "What is interesting is that, on the one hand, the South China Sea is becoming a major playground for all the major powers but, on the other hand, it is exactly because of this that peace and stability are all the more important."

MORE IN TOP OF THE NEWS

A version of this article appeared in the print edition of The Straits Times on June 06, 2016, with the headline 'China says it does not 'make or fear trouble''. Subscribe
Topics:
More
Whatsapp Linkedin FB Messenger Telegram Reddit WeChat Pinterest Print Purchase Article Copy permalink