BEIJING (AFP) - China on Monday (July 23) rejected accusations by US President Donald Trump that it was manipulating the yuan to give its exporters an edge, saying Washington appeared "bent on provoking a trade war".

Mr Trump launched his latest trade salvo on Friday, accusing China and the European Union of currency manipulation and saying he was ready to impose tariffs on all Chinese imports coming into the United States.

But China's Foreign Ministry denied the charge during a daily briefing in Beijing, saying the yuan's rate was determined by market forces.

"China has no desire to spur exports through competitive devaluation of its currency," ministry spokesman Geng Shuang told reporters.

While it does let market forces play a role, China keeps the yuan within a narrow trading band that its adjusts daily and is widely known to intervene, which has triggered past US allegations of manipulation, including from Mr Trump.

"As to the US being bent on provoking a trade war, China does not want a trade war but is not afraid of a trade war," Mr Geng said, when asked about Mr Trump's threat to impose across-the-board tariffs on Chinese goods.

"When necessary, China will fight. Threats and intimidation will not work on the Chinese people." 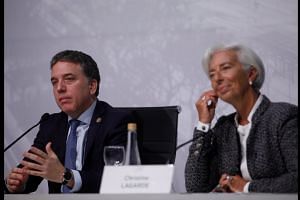 The world's two largest economies face a potential full-blown trade war after the United States earlier this month imposed 25 per cent tariffs on US$34 billion (S$46.39 billion) of Chinese products, drawing a tit-for-tat response from Beijing.

Washington has since threatened tariffs on another US$200 billion in Chinese exports, prompting Beijing to vow further retaliation.

With the trade conflict escalating, fears of a parallel currency war have emerged as the yuan has tumbled over the last several weeks, sparking Mr Trump's ire.

A weaker yuan gives Chinese exports a price advantage overseas, ameliorating some of the impact of the US tariffs, economists have said.