BEIJING • China said yesterday that it was investigating former Interpol chief Meng Hongwei for bribery and other violations, days after the French authorities said the Chinese official had been reported missing by his wife.

On Sunday, Interpol, the France-based global police coordination body, said that Mr Meng had resigned as its president.

China had said on Sunday that Mr Meng, who is also a Vice-Minister for Public Security in China, was under investigation. Yesterday, the Ministry of Public Security specified that the probe was focused on suspected bribery.

"The investigation against Meng Hongwei's taking (of) bribes and suspected violations of law is very timely, absolutely correct and rather wise," the ministry said in a statement on its website.

The ministry said it will also investigate and punish people who took bribes along with Mr Meng.

"The investigation of Meng Hongwei fully shows there is no privilege and no exception in front of the law, and anyone who violates the law must be severely punished," it said.

Officials should never be allowed to "negotiate terms or haggle" over positions within the party, the ministry said, referring to China's ruling Communist Party.

Under President Xi Jinping, China has been engaged in a sweeping crackdown on official corruption.

France's Interior Ministry said last Friday that Mr Meng's family had not heard from him since Sept 25, and the French authorities said his wife was under police protection after receiving threats.

Mrs Grace Meng told reporters that before her husband vanished on a trip to China, he had sent her a phone message with an emoji of a knife. She interpreted the knife image to mean "he is in danger", she said in a brief statement to reporters on Sunday in Lyon, France, where the two were living and where Interpol is headquartered. 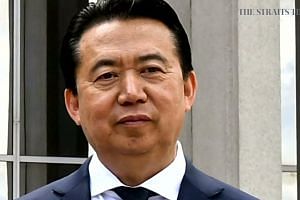 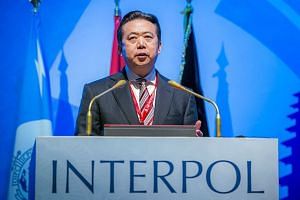 Mrs Meng gave her statement at a hotel, keeping her back to reporters so her face would not be captured on camera, a precaution she said was for security reasons for herself and her children. She said she had received the message with the knife image shortly after Mr Meng arrived in China. It came just four minutes after she received a message from him saying "wait for my call", she said.

She has not heard from him since, and reported his disappearance to French police last Thursday.

At her news conference on Sunday, Mrs Meng said she had decided to speak publicly because she felt it was her responsibility to do so. Her step was extraordinary: Family members of Chinese officials in trouble with the party or government usually do not make a plea for international help.

"From now on, I have gone from sorrow and fear to the pursuit of truth, justice and responsibility towards history," she said. "For the husband whom I deeply love, for my young children, for the people of my motherland, for all the wives and children's husbands and fathers to no longer disappear."

Mr Meng, 64, became president of the global police cooperation agency in late 2016 amid a broader effort by China to secure leadership posts in international organisations, prompting concern at the time from rights groups that Beijing might try to leverage his position to pursue dissidents abroad.

While China may have had its eye on placing its citizens in other top posts at prominent global organisations, "the fact that Meng was 'disappeared' without any notice to Interpol will undermine this Chinese global outreach effort", said Professor Julian Ku of Hofstra University's Maurice A. Deane School of Law.

Presidents of Interpol are seconded from their national administrations and remain in their home post while representing the international policing body. "The president heads the executive committee which meets on average four times a year and sets the strategic orientation for the organisation," an Interpol source said yesterday when asked if Mr Meng spent most of his time in France or China.

The source declined to say whether it was typical for an Interpol president to take his family to France, or whether Interpol provided housing for its president.