BEIJING • China has drafted sweeping regulations targeting online travel agencies and platforms based in the country after a deadly boating accident involving Chinese tourists in Thailand fuelled claims of lax oversight, according to a person familiar with the matter.

The Ministry of Culture and Tourism regulation would mandate that online travel providers improve rescue and emergency plans, better vet and manage their on-ground service providers, buy liability insurance, and protect clients' personal information, said the person, who asked not to be identified.

It would represent Beijing's first concerted attempt to monitor online tourism outfits, which have proliferated as Chinese tourists fan out across the globe.

While storefront travel agencies are forced to buy liability insurance under current laws, those regulations do not extend to online platforms. Some Web providers do not hold a government-issued operating licence or liability insurance, the person said.

The move to regulate the sector comes as Beijing battles to overcome a consumer confidence crisis triggered by scandals in its drug industry. Millions of Chinese are expected to hit the road in the coming days as the country begins an annual "Golden Week" break to mark its National Day holiday on Oct 1.

The ministry did not reply to a request for comment yesterday.

Before the regulation can be implemented, Chinese law stipulates that it must solicit opinions from the public. The person said this would happen soon, without specifying a date. 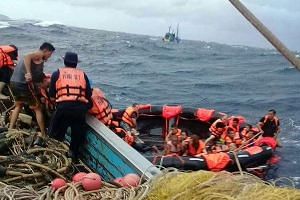 Boat capsizes in rough seas off Phuket, one dead

A boat carrying Chinese tourists capsized off Phuket in July, leaving 47 dead and drawing harsh criticism in China over the lack of accountability for Internet operators. The Beijing News reported that 121 of the 127 Chinese citizens involved in the accident had booked their trips via online tour platforms.

Shortly after the accident, the ministry issued an urgent notice requiring the local authorities to carry out emergency investigations of online travel platforms, and call off any tour products found to be substandard.

China will be one of the world's fastest growing online travel markets over the next decade, according to Bloomberg Intelligence. The major players in its Web tourism industry include Ctrip.com International, Tuniu Corp, and Alibaba Group's travel service, Fliggy.

The country's outbound tourism expenditure swelled to US$261 billion (S$357 billion) in 2016 - about one-fifth of the global market - 11 times the amount spent a decade earlier, according to the United Nations World Tourism Organisation.