Addressing the UN General Assembly, Xi said China would achieve a peak in carbon dioxide emissions before 2030 and carbon neutrality before 2060 - the first time the world’s biggest emitter of carbon dioxide has pledged to end its net contribution to climate change.

“China will scale up its intended Nationally Determined Contributions (to the Paris agreement) by adopting more vigorous policies and measures,” Xi said, urging all countries to pursue a “green recovery of the world economy in the post-Covid era”.

Xi used the lectern to call for multilateral action on climate change after US President Donald Trump called the Paris climate agreement – with nearly 200 signatories – a one-sided agreement and criticised China for being the world’s largest source of carbon emissions.

Both countries have been hit this year by extreme weather of the kind predicted with climate change.

In China, heavy rains over the summer unleashed the most punishing flood season in three decades, while the United States is facing one of its busiest hurricane seasons at the same time that record wildfires ravage western states.

Trump has referred to climate change as a “hoax,” and in 2017 pulled the United States out of the Paris accords laying out an international approach to global warming.

Joe Biden, his Democratic presidential challenger and former vice-president, has included climate change on his list of major crises facing the United States.

Trump, who has rolled back or pared down hundreds of environmental regulations, said the United States had reduced its carbon emissions by more than any country in the agreement.

“Those who attack America’s exceptional environmental record while ignoring China’s rampant pollution are not interested in the environment. They only want to punish America. And I will not stand for it,” Trump said.

“It demonstrates Xi’s consistent interest in leveraging the climate agenda for geopolitical purposes,” he said. 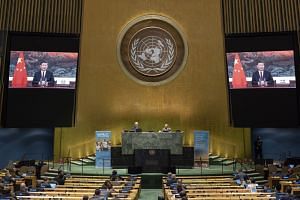 At UN, China's Xi Jinping says no intention to fight 'a cold war or hot one' with any country

Although many analysts have predicted that China was already on track to achieve peak emissions by 2030, the formal announcement was welcomed by the European Union, which has been negotiating with China to set a target for carbon neutrality and to announce a peak date.

The EU had been urging Beijing to bring the date forward to 2025.

“I welcome the announcement by President Xi that China has set a date for its CO2 emissions to peak and will become carbon neutral before 2060,” said Frans Timmermans, vice-president for the European Green Deal, while adding that every country needs to ramp up its climate targets.

Brazilian President Jair Bolsonaro, like Trump, used his UN speech to push back on international criticism of his country’s handling of the environment, as the number of acres on fire in the Amazon is at a 10-year high, while blazes in the Pantanal wetlands are the worst on record.

Environmental advocates blame Bolsonaro for emboldening illegal ranchers and land speculators who set fire to land to increase its value for agricultural use, but he said Brazilian agriculture feeds 1 billion people in the world and has strong environmental protections.

“And yet we are the victims of one of the most brutal campaign of misinformation about the Amazon and the Pantanal,” he said, without specifying what information was false.