But it won't use initiative to interfere in other nations' affairs, says Xi at Belt and Road Forum

Chinese President Xi Jinping has pledged US$124 billion (S$174 billion) to boost his hugely ambitious new Silk Road project, but stressed that China will not use it as a tool to impose its will on others and that every country is welcome to join it.

"We will not resort to outdated geopolitical manoeuvring," said Mr Xi at the opening of the inaugural Belt and Road Forum in Beijing.

"What we hope to create is a big family of harmonious co-existence," he added, seeking to assuage concerns that China is using the initiative to expand its influence by interfering in other countries' internal affairs and exporting its model of development.

The Belt and Road Forum comes nearly four years after Mr Xi unveiled his plan to revive ancient trading routes via land and sea that linked Asia, Africa and Europe.

Mr Xi branded the plan to build roads, railways, ports and industrial parks along the routes "a project of the century" in a "world fraught with challenges".

The gathering of some 1,500 representatives from over 130 countries to discuss international cooperation led by China comes amid a backlash against globalisation and free trade in the US and Europe.

"Trade is an important engine driving growth," said Mr Xi to an audience that included 29 heads of state and government and leaders of key international organisations such as the United Nations and World Bank.

"We should embrace the outside world with an open mind, uphold the multilateral trading regime, and advance the building of free trade areas," he added. 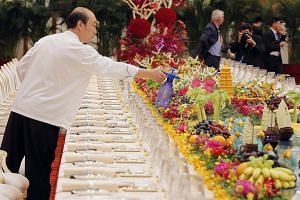 US can offer China 'best-value services'

Mr Xi said his vision is to form a new model of win-win cooperation centred on open economies, market integration and inclusive development.

Yesterday, the Chinese leader announced a massive package of additional funding to finance projects along the trade routes.

In the next three years, China will also set aside 60 billion yuan to improve the well-being of people living in countries along the routes.

Analysts say this shows Mr Xi's resolve in giving the initiative a strong impetus at the beginning.

"You can imagine it as a start-up. You need someone to put in the initial investment. So China is now providing the seed money. And it has to be big enough to attract further rounds of funding," said Professor Wang Huiyao, president of the Centre for China and Globalisation, an independent think-tank in Beijing.

Given China's recent woes with its falling foreign reserves and a weakening yuan followed by tighter controls of the outflow of capital, there have been concerns over whether the world's second- largest economy has the money to drive its ambitious plan, he said.

"But as you can see, the worries are unfounded," he added.

Many developing countries along the trade routes have welcomed the initiative even as some are wary of China asserting its influence.

India has refused to take part in the forum, unhappy that a key project with Pakistan runs through Kashmir, which it also lays claim to.

The United States yesterday said it welcomes the initiative and that US companies are ready to take part in it.

Some nations, such as Britain, have embraced it but others like Australia are cautiously receptive.

A version of this article appeared in the print edition of The Straits Times on May 15, 2017, with the headline 'China pledges $174b for mega Silk Road project'. Subscribe
Topics:
More
Whatsapp Linkedin FB Messenger Telegram Reddit WeChat Pinterest Print Purchase Article Copy permalink