HONG KONG (BLOOMBERG) - China is working to influence media outlets beyond its borders in an effort to impose its ideology and deter criticism of its actions, a press freedom group said.

In a report released on Monday (March 25), Reporters Without Borders detailed what it said was China's impact on a global decline in press freedom and analysed President Xi Jinping's strategy to control information outside his own country.

The group found that Beijing was using advertising buys, paid trips for journalists and an expanding global propaganda network to impose its "ideologically correct" terminology and to obscure darker chapters of the country's history.

China was ranked 176 out of 180 in Reporters Without Borders' 2018 World Press Freedom Index, ahead of only Syria, Turkmenistan, Eritrea and North Korea.

The country's foreign journalists' organisation said in January that increased surveillance and government interference with reporting amid a crackdown on Muslims in the far western region of Xinjiang had fuelled a "significant deterioration" in the work environment for correspondents.

At the time, China's Foreign Ministry dismissed the correspondents' findings, saying the allegations were "not worth refuting" and "not constructive" to resolving the issues.

Mr Christophe Deloire, secretary-general of Reporters Without Borders, said in a statement that he hoped the report released on Monday would help spur countries to action. 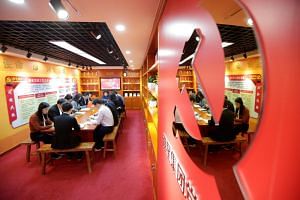 "If democracies do not resist, 'Chinese-style' propaganda will gradually invade the world's media, competing with journalism as we know it," he said.

The project to control the media is less well-known than Mr Xi's signature Belt and Road trade-and-infrastructure initiative but just as ambitious.

It has also made a major investment in developing media capable of reaching people worldwide, with state-run broadcaster China Global Television Network now in 140 countries and China Radio International airing in 65 languages.

Meanwhile, tens of thousands of journalists from emerging countries have been brought to Beijing on all-expenses-paid trips to "train their critical mind" in exchange for favourable coverage of China in their home outlets.

The Chinese government has also carried out unspecified acts of blackmail, intimidation and harassment on a "massive scale", according to the report.

It is also exporting its WeChat messaging service, Baidu search engine and other censorship and surveillance tools, the report said.