BEIJING (REUTERS) - China's state planner on Tuesday (Jan 29) unveiled a flurry of measures aimed at spurring sales of items ranging from cars and appliances to information services, as the world's second-largest economy grows at its slowest pace in nearly 30 years.

In a statement on its website, the National Development and Reform Commission (NDRC) said it is loosening restrictions on the second-hand auto market, and will provide subsidies to boost rural sales of some vehicles and purchases of new energy vehicles.

China will offer "appropriate" subsidies on small truck and passenger cars in rural areas, the NDRC said, without giving details.

For the first time since the 1990s, auto sales in the world's biggest car market shrank in 2018, as China grapples with a slowing economy and the trade war with the United States.

The NDRC also said it will accelerate the launch of commercial licenses for 5G, the next generation wireless technology that promises to link everything from vehicles to household devices at far greater speeds.

China has pledged to speed up the commercial use of 5G technology in 2019 and become a manufacturing powerhouse.

Mounting pressure on China's economy pushed growth last year to its lowest since 1990, at 6.6 per cent, even as Beijing stepped up stimulus measures and pushed banks to lend more. 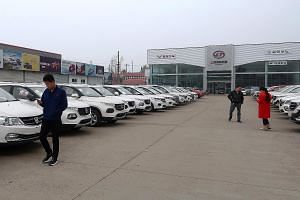 China will step up fiscal spending this year to support its economy, focusing on further cuts in taxes and fees for small firms, finance ministry officials said last week.