Three issues lie in the way of an agreement between China and the United States, which will have to be ironed out in upcoming talks in Beijing, China's chief trade negotiator said as the US moved to impose higher tariffs on Chinese goods after a five-month truce.

Spelling out for the first time what these sticking points are, Vice-Premier Liu He maintained that negotiations have not broken down, even though his meeting with US Treasury Secretary Steven Mnuchin and Trade Representative Robert Lighthizer on Friday ended after just 90 minutes.

In an interview after talks were wrapped up, Mr Liu told Chinese media in Washington that while a consensus was reached on many issues, the two sides could not see eye to eye on these points: Beijing's demand for the US to remove all additional tariffs; the target set by the US for goods purchased by China; and the wording of the text in the agreement.

The trade war was triggered by tariffs and there would be no deal if they were not removed, said Mr Liu, based on a transcript published on Hong Kong Phoenix TV's website. Chinese purchases of US goods should also be matched by real demand.

China is after a deal that is "equal and dignified", he said, adding that the disagreements that have persisted were over matters of principle. "Every country has its principles, and we cannot give in."

Mr Liu's remarks gave the clearest indication yet about what China's red lines are.

US negotiators earlier accused Beijing of reneging on its commitments, reportedly refusing to change its laws to address US complaints of forced technology transfer, intellectual property theft and anti-competition policies.

But Mr Liu said China did not go back on its word; it only disagreed with the language in the draft agreement.

He also said the US had changed its mind on a sum agreed for Chinese purchases by US President Donald Trump and his counterpart Xi Jinping when the leaders met in Argentina last December. 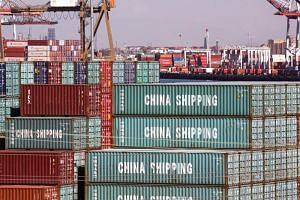 The US on Friday moved to increase levies on US$200 billion (S$273 billion) worth of Chinese goods from 10 per cent to 25 per cent.

China has yet to launch countermeasures despite vowing to do so; last year it had retaliated with tariffs on US$110 billion worth of American goods.

Mr Trump, who had said just weeks ago that he would be signing an epic deal with Mr Xi, declared on Friday that the US is preparing to impose 25 per cent of duties on another US$325 billion worth of Chinese products, effectively taxing nearly all of Chinese imports.

Only last month, Mr Trump had said he would soon host Mr Xi at the White House, prompting analysts to speculate then that a trade agreement could be reached.

But, with no sign of easing his stance on trade with China, Mr Trump tweeted yesterday: "Such an easy way to avoid tariffs? Make or produce your goods and products in the good old USA. It's very simple!"

Professor Cao Heping from Peking University's School of Economics believes a deal will be reached before the end of next month, as the window for the US to keep negotiating might close after that quarter, with the country gearing up for local and presidential elections in November and next year respectively.

"The Republicans do not have a solid foundation as a ruling party, and it has gotten itself into trade conflicts with its allies, not to mention military and political conflicts elsewhere. If it can't nail down a deal with a big nation like China, Mr Trump will lose his standing," said Prof Cao.

Yesterday, Mr Liu also made clear that the East Asian giant will not cower in fear.

"China will be rational in its approach, but we're not afraid."

A version of this article appeared in the print edition of The Sunday Times on May 12, 2019, with the headline 'China lists 3 hurdles in the way of trade deal with US'. Subscribe
Topics:
More
Whatsapp Linkedin FB Messenger Telegram Reddit WeChat Pinterest Print Purchase Article Copy permalink