Official data from the General Administration of Customs showed a fourth straight month of no diesel, gasoline or fuel oil shipments. China has traditionally been the main source of North Korea's fuel.

The only oil product sent to North Korea was 201 tonnes of liquefied petroleum gas (LPG).

The export breakdown by product comes after data on Friday showed trade with North Korea fell to the lowest level in dollar terms on records going back to June 2014.

China imported no iron ore, coal or lead from North Korea last month, according to the customs data, in line with those latest curbs, aimed at persuading Pyongyang to abandon its weapons programme.

Cereal trade also slowed, with exports of rice totalling 180 tonnes to North Korea, down 4.3 per cent from a year ago. It did not export any corn.

The pace of that slowdown in business has accelerated in recent months with exports of petroleum and some grains almost grinding to a halt in November and December. 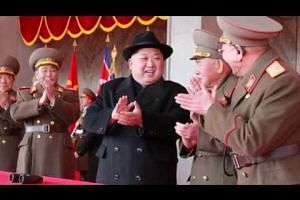 The data release came after the Trump administration on Friday imposed its largest package of sanctions against North Korea in a bid to increase pressure on Pyongyang for its nuclear and ballistic missile tests.

In a speech on Thursday, US ambassador to the United Nations Nikki Haley said that the penalties are having an impact because North Korea now has less money to spend on its ballistic missile tests.

Last year, North Korea conducted dozens of missile launches and its sixth and largest nuclear test in defiance of UN resolutions as it pursues its goal of developing a nuclear-armed missile capable of reaching the United States.

China has repeatedly said it is fully enforcing all resolutions against North Korea, despite suspicion in Washington, Seoul and Tokyo that loopholes still exist.