In a statement provided to Reuters on Sunday (Oct 8), the Ministry of Public Security said an investigation had found "no evidence"of Chinese government involvement in the alleged cyber attacks.

The law enforcement agency said China had also provided the United States government with evidence that Guo, who has applied for political asylum in the United States, fabricated documents used to support his claims. It said China would make an official request for US authorities to investigate the matter.

"The falsified official documents and the false information he fabricated are sensational and outrageous," the ministry said in a rare English-language statement.

Guo did not immediately respond to requests for comment.

The Washington-based Hudson Institute think-tank was scheduled to host Guo last Wednesday in a rare public appearance, but cancelled the event the day before without explanation.

The event would have coincided with the visit of an official Chinese delegation to the US capital for a high-level law enforcement and cybersecurity dialogue between the two countries.

The Hudson Institute said it had detected a Shanghai-based attack aimed at shutting down access to its website several days earlier. 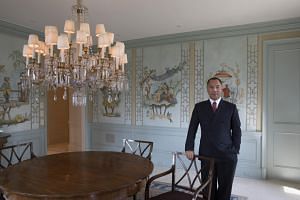 The suspected attack prompted a complaint from US Attorney General Jeff Sessions during a meeting with China's Public Security Minister Guo Shengkun on Wednesday, the Wall Street Journal reported.

The New York-based Guo applied for US political asylum in September, but said this week the law firm representing him, Clark Hill PLC, had backed out after being targeted by Chinese hackers.

Clark Hill lawyer Thomas Ragland, who lodged the asylum claim, confirmed he was no longer representing Guo, without elaborating.

After his Hudson event was called off, Guo held a news conference at the National Press Club on Thursday where he produced what he claimed were "top-secret" official documents showing China had sent secret agents into the United States.

China's Ministry of Public Security said the documents shown by Guo were "clumsily forged" and "full of obvious mistakes".

Guo has made wideranging corruption allegations against senior Communist Party leaders via a daily stream of Twitter and YouTube posts since the start of the year, which he says are aimed at disrupting a key five-yearly Communist Party congress which begins next week.

The Chinese government has been seeking to discredit Guo, who is the subject of an Interpol red notice issued at Beijing's request, as a criminal suspect who should not be trusted.