With further development in emerging industries and modern services, domestic consumption could contribute more than 60 per cent to growth this year, Mr He Lifeng, chairman of the National Development and Reform Commission (NDRC), said yesterday. This will be up from 58.8 per cent last year.

The growth target announced on Monday "is in line with expectations and objectively achievable through hard work", Mr He said at a press briefing on the sidelines of the annual Parliament meeting.

The growth target remains unchanged from last year's despite Beijing signalling that it intends to focus on quality growth rather than fast growth. The world's No. 2 economy expanded 6.9 per cent last year on the back of stronger consumer spending and exports.

Standard Chartered senior China economist Li Wei said: "There is no contradiction between the growth target and the shift to emphasise innovation and getting companies to move up the value chain."

He added: "Reforms are to be carried out based on an acceptable level of growth. Besides, the government does not have to solve all the problems within one year."

Mr Li noted that the positive momentum for steady growth remains, although a weakening property market and the threat of a trade war with the United States could be potential risks. 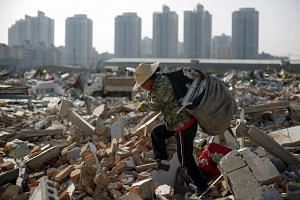 Advanced technology will be used to drive the development of traditional businesses, to transform a large number of them into better companies, Mr He said.

While green development, especially in fighting pollution, has brought blue skies back to Beijing, it caused a natural gas shortage in northern China over the winter.

Mr He promised to speed up the construction of a network of natural gas pipelines to connect all regions as well as gas storage in cities.

China will make extra effort to boost local gas production in the short term and sign contracts with neighbouring countries for long-term supply, he added.

NDRC officials reiterated that China welcomes foreign investment and is set to open up more of its markets.

Foreign investment has become an important part of the Chinese economy in the past 40 years of reform and opening up, NDRC vice-head Ning Jizhe told the same press briefing.

In a nod to longstanding complaints that China has not opened its economy wide enough for foreign investors, Mr Ning said "stronger" policies need to be rolled out to improve the investment environment.

China will strictly protect the intellectual property rights of foreign firms and ensure that domestic and foreign firms compete on an equal footing, he said.

"China will further open up the western regions, and inland and border areas.

"Foreign companies moving to the central, western and north-eastern regions will get help with financial capital and land," he added.