BEIJING (Reuters) - China took steps to rein in the rapidly growing and lightly regulated market for online micro-lenders in the government's latest crackdown on internet finance, sending shares of US-listed Chinese financial firms into a tailspin.

A top-level Chinese government body issued an urgent notice on Tuesday (Nov 21) to provincial governments urging them to suspend regulatory approval for the setting up of new internet micro-lenders, sources who had seen the notice told Reuters.

The multi-department body, tasked by the central government to rein in risks in the internet finance sector, also told local regulators to restrict granting of new approvals for micro-loan firms to conduct lending across regions, according to the sources.

The information office of the State Council, or Cabinet, and the People's Bank of China did not immediately respond to faxed requests for comment. 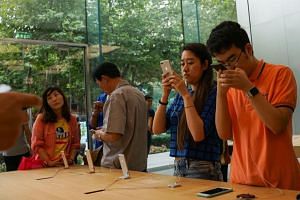 The clean-up has led to the creation of a top-level body comprising government entities that include the central bank and the banking regulator.

The crackdown on micro-lenders comes as authorities warn about rising household debt, which includes mortgages and consumer loans.

Unsecured consumer lending via Chinese online platforms more than tripled last year to almost US$140 billion, according to a recent report by the Cambridge Centre for Alternative Finance.

On Tuesday, shares in Chinese online lender Qudian sank nearly 20 per cent on Nasdaq, before recovering some ground to end 3.8 per cent lower at US$19.31.

The company went public at US$24 per share, raising about US$900 million in an initial public offering that priced above expectations, driven by robust US investor demand for fast-growing Chinese companies.

On Tuesday, shares of China Commercial Credit Inc ended down 8.8 per cent and PPDAI Group slumped 14 per cent. Jianpu Technology, which also debuted just this month, finished 10.8 per cent lower.

Shares of China Rapid Finance, a P2P platform and a loan provider, fell before closing 3.3 per cent higher.

There was no apparent reaction in Chinese mainland stocks, which were broadly up on Wednesday's morning trade led by the finance sector.

Companies providing small loans, especially on the internet, have expanded rapidly in the past year, partly due to loose government rules.

Such firms meet demand for credit from individuals who have been shunned by Chinese banks, which typically prefer big corporate clients.

Loan amounts span from a few hundred yuan to tens of thousands, with borrowers typically without steady incomes or any credit history.

Interest rates on these small loans can be more than 35 per cent per annum, some even higher, and are not often appreciated by individuals who are drawn to the easy terms and conditions.

Some borrowers also take loans from one lender to refinance loans from other credit providers, causing a spike in their debts. Local media have also reported cases of oppressive and sometimes violent loan-collection methods in a sector that has thrived under little supervision.

Tuesday's move came just days after LexinFintech filed a US$500 million IPO with the Securities and Exchange Commission, the latest in a series of offerings from the sector.