BEIJING • Chinese censors yesterday deleted articles and postings about the vaccine industry as an online outcry over the country's latest vaccine scandal intensified.

Regulators said last week that they had halted production of a rabies vaccine at a large pharmaceutical company in the north-east after finding fabricated records and other problems during an inspection.

It was just the latest in a series of health and safety scandals which have fuelled fear over the safety of basic food and medicine and anger at regulators asleep on the job.

China's censors and regulators struggled to stay abreast of the public's response, deleting posts on WeChat as state media tried to take control of the narrative.

Yesterday night, China's Food and Drug Administration (CFDA) announced it had ordered all production stopped at the vaccine-maker and launched a probe.

Changchun Changsheng Biotechnology is China's second-largest maker of the rabies vaccine and a subsidiary of a large publicly-traded vaccine-maker.

Anxiety grew over the weekend as an essay alleging corruption and murky practices in the vaccine industry spread across WeChat. Netizens reposted the self-published essay as censors swooped in to delete the content. "If the state does not protect its citizens, how can we love our country?" asked one Weibo user. Another lamented: "Looking at the news, I don't dare to have an injection."

The CFDA said last week that the problematic rabies vaccine had not left Changsheng's factory.

The company said in a stock exchange filing yesterday that it had already halted production of another vaccine - for diphtheria, tetanus and pertussis - which regulators found last year to be sub-standard and which had also become the focus of public attention.

Still the action aroused concern that other problematic vaccines had already been administered to children. In Beijing, an unnamed official at the Centre for Disease Control and Prevention told local website The Paper that parents in China's capital need not worry: "Beijing does not have either of these two vaccines in question, the public can be at ease."

Regulators in Guangdong and Sichuan, cited by state broadcaster CCTV, told residents that Changsheng's problematic vaccines had not been made available in their provinces. But CCTV acknowledged that 250,000 doses of the problematic vaccine had been sold to the eastern province of Shandong. 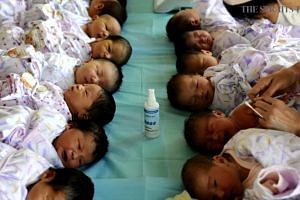 The People's Daily said yesterday that local regulators must "rapidly take action, do a complete investigation and announce authoritative information in a timely manner to pacify public anxiety".

A similar scandal erupted in Shandong in 2016 over the improper storage, transport and sale of millions of dollars' worth of vaccines - many of them expired.