BEIJING (REUTERS) - Chinese President Xi Jinping called for a return to "unity and harmony" on Thursday (Jan 31) as he welcomed gas-rich Qatar's emir to Beijing, amid a festering dispute that has seen some Arab states lead by Saudi Arabia severing relations with Doha.

Qatar, which denies the charge, says the boycott seeks to curtail its sovereignty, while the row has defied mediation efforts by Kuwait and the United States which sees Gulf unity as essential to containing Iran.

The rift has shown no sign of being resolved soon. Qatar has been bolstering ties with its supporters, such as Turkey, with trade between those two expected to have risen by more than half in 2018.

China has largely stayed out of the dispute, calling for the problem to be resolved via talks, though has played host to senior Qatari officials since the spat began, including in December to Qatar's Foreign Minister. 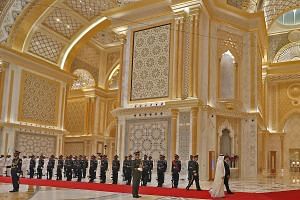 What's behind the growing ties between Asia and Arab monarchies 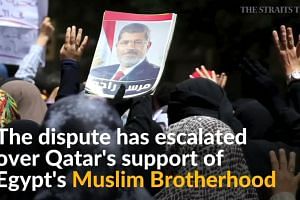 China supports the efforts of the Gulf Cooperation Council to seek an "appropriate resolution to disputes and contradictions via political and diplomatic means, to return unity and harmony between Gulf and Arab countries", Mr Xi said.

In remarks in front of reporters, Mr Xi called Sheikh Thani "an old friend and a good friend".

Sheikh Thani told Mr Xi that he was very happy with his personal friendship with him.

"We are ready to have bigger investments in China, in infrastructure or in any other field we see as important for us," he said.

Earlier in January, state-owned Qatar Airways said it had acquired a 5 per cent stake in China Southern Airlines , in a move to gain access to the fast-growing Chinese market.

China has traditionally played little role in Middle East conflicts or diplomacy, despite its reliance on the region for oil, but it has been trying to raise its profile, especially in the Arab world. Saudi Arabia's King Salman visited Beijing in 2017.

However, China has had to walk a fine line, as it also has close ties with both Iran and Israel.