BEIJING • A typhoon that forced the cancellation of hundreds of flights veered north of Taiwan yesterday and headed towards China, where officials issued a red alert along coastal areas.

Typhoon Lekima is expected to hit Zhejiang province in eastern China today, and possibly veer north towards Shanghai, where cruise ships have been asked to delay their arrival.

More than 300 flights to and from Taiwan were cancelled, and ticket sales for some trains to and from the region were halted.

City and county governments in northern Taiwan cancelled work and classes yesterday in anticipation of heavy rainfall and strong winds.

With the typhoon tracking towards the capital, Taipei, and other major cities in the area, shoppers cleared shelves of fresh produce at grocery stores, fearing that they would be stuck indoors for the day.

China's red alert is the most serious of its four possible typhoon warnings, and authorises officials to order evacuations, suspend train and air travel, and force ships back to port.

Multiple flights out of cities, including Shanghai and Hangzhou, were cancelled yesterday in anticipation of heavy rain. Several trains heading to and from the Yangtze River Delta region out of Beijing were also cancelled. 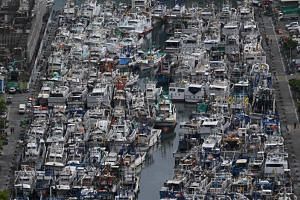 The authorities in the eastern province of Shandong said torrential flooding was likely in parts of the province for several days, adding that the downpour would also help ease drought concerns and replenish reservoirs.

The provincial authorities in Jiangsu province said that operations were under way to increase the drainage of major lakes and ports in the region to bring down water levels before the rainstorms, according to local media reports.

The Shanghai Daily reported that 16,000 people were being evacuated. Shanghai residents were seen using tape to reinforce windows.

More than 25,000 tourists were also evacuated on Thursday from Mount Putuo, south-east of Shanghai, according to local media reports.

The NMC warned that 24-hour rainfall levels across eastern China could reach around 250mm to 320mm between yesterday and today.

The port authorities have already been ordered to take action, with ships set to be diverted to Hong Kong to help prevent accidents and collisions.

China's Ministry of Water Resources has also warned of flood risks in the eastern, downstream sections of the Yangtze and Yellow rivers until next Wednesday.

China is routinely hit by typhoons in its hot summer months, but weather officials said that they have been relatively infrequent so far this year.

A version of this article appeared in the print edition of The Straits Times on August 10, 2019, with the headline 'China battens down for typhoon'. Subscribe
Topics:
More
Whatsapp Linkedin FB Messenger Telegram Reddit WeChat Pinterest Print Copy permalink