China and Asean should carry out more and bigger exercises in the future to build mutual confidence, Singapore Defence Minister Ng Eng Hen said yesterday, regarding the way forward for the first Asean-China Maritime Exercise.

He also urged China to engage more with other countries to assure them that the country's rise is peaceful, as he pointed out how Beijing recognises that its rapid military modernisation may make others feel "uncomfortable, even threatened".

Dr Ng was speaking to reporters during a visit to the exercise held in Zhanjiang, a city in the southern Guangdong province.

The six-day multinational exercise, which began on Monday, involves eight ships. It is co-organised by the Republic of Singapore Navy (RSN) and the People's Liberation Army Navy, with participation from all nine other Asean countries and more than 1,000 personnel.

He said the Chinese ship was impressive, with modern communications equipment and a lean crew of about 200 personnel.

"And that's very good for China. But I think China also recognises that its military modernises so rapidly, (it) can understand why other countries may feel uncomfortable, even threatened, and I'm glad that the leadership has said that they understand this."

He added that the most important thing for China is to engage more with external parties - "to continue to assure both by their words and actions that China's rise is peaceful, and that China's rise would be good for everyone".

The exercise comes after an incident near disputed isles in the South China Sea earlier this month, when a Chinese destroyer came within 41m of the US warship USS Decatur.

Dr Ng said the way forward for the Asean-China Maritime Exercise is to have more of them, and larger ones, so that confidence can be built. He said the exercise was important to the region as it was "not a given" that militaries will always cooperate, or that they would agree on everything.

The American vessel was on a patrol aimed at challenging China's territorial claims and what the United States views as Chinese efforts to limit freedom of navigation in the strategic waters.

The vital waterway, which faces overlapping territorial claims between China and several South-east Asian states - Vietnam, the Philippines, Malaysia and Brunei - as well as Taiwan, has been a source of tension and concern in the region.

Speaking to reporters at the Ma Xie Naval Base, Dr Ng said the way forward for the Asean-China Maritime Exercise is to have more of them, and larger ones, so that confidence can be built.

He said the exercise was important to the region as it was "not a given" that militaries will always cooperate, or that they would agree on everything.

Yesterday, participants from Singapore and Brunei received Chinese sailors on their respective ships as part of preparation for helicopter cross-deck landings later in the exercise.

The commander of RSN's First Flotilla and commanding officer of 185 Squadron, Colonel Lim Yu Chuan, and the commander of PLA Combat Support Flotilla, Southern Theatre Command, Senior Captain Zhu Jianda, who are exercise co-directors, were briefed on its conduct. 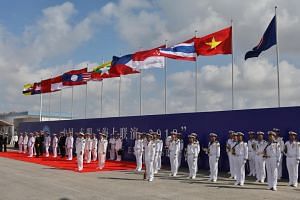 While Singapore handed over the chairmanship of the Asean Defence Ministers' Meeting last week to Thailand, Dr Ng said the Republic will continue to play its part as it believes in multilateralism.

"Singapore believes in a system based on law - resolution of disputes through peaceful means where both large and small countries can benefit. So obviously it's to our interest to push for these ideas," he said.