BEIJING (AFP) - The theft of a thumb of an ancient terracotta warrior statue on display in the US incited a wave of criticism on Chinese social media on Tuesday (Feb 20), following China's calls to severely punish the thief.

Michael Rohana, 24, has been arrested over the theft during an after-hours "ugly sweater party" just before Christmas at the Franklin Institute in Pennsylvania where 10 of the figures are on display.

According to an arrest affidavit filed by a Federal Bureau of Investigation (FBI) agent, Rohana snuck into the closed exhibit and snapped a selfie with the warrior, worth US$4.5 million (S$6 million).

Rohana then appeared to break off the statue's left thumb and pocket it before leaving the event with friends.

The museum noticed its disappearance weeks later on Jan 8.

The FBI agent tracked Rohana back to his home in Bear, Delaware, where the young man admitted to having stashed the thumb in a desk drawer.

He was arrested for theft of a major artwork from a museum, concealment of a major stolen artwork, and the interstate transportation of stolen property, but released on a US$15,000 bail, according to court documents seen by Agence France-Presse. 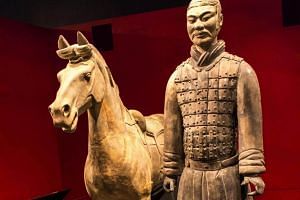 Built around 209BC to stand guard over the tomb of the first emperor, the 8,000-strong terracotta army is one of China's most important archaeological discoveries, and considered a symbol of ancient Chinese artistic and military sophistication.

A major tourist attraction in Xi'an, capital of the northern province of Shaanxi, it has been a Unesco world heritage site since 1987.

"We call on the US side to severely punish the person who committed such a damaging act of vandalism and theft of humanity's cultural heritage," the director of the Shaanxi Provincial Cultural Relic Exchange Centre told the Beijing Youth Daily on Sunday.

Two experts would be sent to the US to help with repairs, the director said, adding that they had begun the process of claiming compensation for damages.

News of the damage sparked strong criticism on Chinese social media, with many comments nationalistic in tone.

"Whoever agreed to use our ancestor's funerary objects to curry favour with foreigners should be the one 'severely punished' first," wrote one user.

"If they don't understand that our statue is precious why would we lend it to the US in the first place?" another asked.

But a few were more circumspect in their disapproval, recalling China's destruction of its own heritage.

"Who will be held responsible for all the cultural relics destroyed in the Cultural Revolution?" a user wrote, referring to the tumultuous period in the 1960s and 70s when countless artefacts were defaced or destroyed as China tried to rid itself of the influence of traditional culture.