BEIJING - In a year when a crucial power transition will take place, China has set a growth target of around 6.5 per cent and a work plan that is calculated to maintain stability while not losing sight of longer term reforms.

After the economy has registered its lowest growth rate in 26 years of 6.7 per cent last year, Premier Li Keqiang on Sunday (March 5) set a lower target of "around 6.5 per cent, or higher if possible" amid continued sluggish global growth.

In the Premier's own words: "Stability is of overriding importance. We should ensure stable growth, maintain employment and prevent risks." 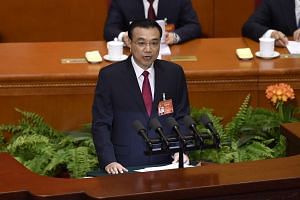 Mr Li was giving his government work report at the opening of the National People's Congress, China's parliament, on Sunday (March 5).

The inflation target was kept at 3 per cent, the same as last year, after actually rising 2 per cent last year.

A key objective of stable growth is job creation, and the aim for this year is to create 11 million new urban jobs, one million more than last year's target but lower than the actual number of new jobs last year of 13.14 million.

The urban unemployment target is kept at 4.5 per cent, the same as last year, while last year's unemployment rate was 4.02 per cent.

On issues close to people's hearts like housing, the plan is to have more targeted measures after those of last year failed to bring down prices in the big cities. There are also plans to renovate 6 million housing units in rundown areas of cities and towns.

Mr Li also promised to "make our skies blue again" in the face of people's frustration over the smog that often overhangs the country's cities and industrial areas.

Cutting overcapacity remained a priority while reforms including the deepening of supply-side structural reforms - to cut overcapacity and develop new growth drivers - are also on the cards.

Poverty alleviation is also a main task particularly with a view to meeting the target of becoming a "moderately prosperous society in all respects" by 2020.