As a unit of the People's Daily - the ruling Communist Party's mouthpiece - it is seen by clients as the go-to online censor.

Investors concur, lifting shares in People.cn by around 240 per cent since the start of 2019.

"The biggest advantage of People.cn is its precise grasp of policy trends," said independent analyst An Fushuang, who is based in Shenzhen.

In recent years, China has shut tens of thousands of websites and social media accounts that contained what it said was illegal content as well as "vulgar" and pornographic material.

Tibet, Taiwan, the 1989 crackdown on Tiananmen Square, and even local government scandals, are also sensitive topics prone to censorship. 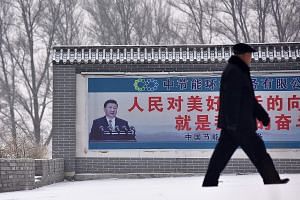 People.cn has clinched deals with tech firms including leading news aggregator Jinri Toutiao to identify and delete material that does not meet government guidelines.

Its other partners include Liangziyun, a Shenzhen-based tech company that operates nearly 1,000 social media accounts and has hundreds of millions of followers.

Full-year net income is expected to have risen as much as 140 per cent, People.cn said in late January, the biggest annual increase since 2011. That would mean net profit of as high as 214.8 million yuan (S$43.3 million).

Revenue from its censoring business is forecast to have jumped 166 per cent last year, the company said in a filing to the Shanghai Stock Exchange.

Encouraged by surging revenue, People.cn is raising a bigger army of censors. This month, it signed a strategic deal with the government of Jinan in eastern Shandong province to help the city become China's censorship capital.

People.cn, whose content-vetting business already has hundreds of employees, will set up an affiliate company in Jinan, the official Jinan Daily reported, drawn by the city's proximity to Beijing and ample supply of college graduates that could join the firm as content analysts.

People.cn declined to comment when asked by Reuters about its expansion plans and expected earnings, due out in mid-April.

Types of content vetted by People.cn include images, texts, music, video, apps, games, advertisements and animations, according to the company.

The bottom line is to filter out and block harmful information and spot and correct false ideas in time, Ms Ye said.

Content that AI has trouble recognising and information in "grey areas" such as metaphors and subtle references are left to human analysts.

"The platform adjusts key words for monitoring from time to time according to directives from the Communist Party propaganda department," said a Beijing-based manager at a major United States-listed Chinese tech company that had collaborated with People.cn to develop AI technology for its platform.

The platform continues to learn new words and rules on its own, for example by memorising state media reports, the person, who was not authorised to speak to media, told Reuters.

"With some big-name social media accounts being shuttered recently, companies are paying more and more attention to content compliance," said independent researcher An.

"And with the development of 5G, the space and scale for the online content censorship market will only grow bigger and bigger."