SEOUL (Bloomberg) - Victor Cha, a former White House official who had been under consideration to become US ambassador to South Korea, warned in an essay published on Wednesday (Jan 31) against giving North Korea a "bloody nose" using a targeted military strike on the regime.

"North Korea, if not stopped, will build an arsenal with multiple nuclear missiles meant to threaten the US homeland and blackmail us into abandoning our allies in Asia," Cha wrote in the Washington Post.

"But the answer is not, as some Trump administration officials have suggested, a preventive military strike."

The Washington Post reported earlier that Cha, Trump's initial choice for ambassador, was no longer expected to be nominated after privately expressing disagreement in late December with the administration's North Korea policy.

The article also cited a person familiar with the nomination process as saying a flag was raised during Cha's background check, but didn't offer specifics.

Cha declined to comment to the Post on that issue, and didn't respond to calls and text messages on Tuesday night.

Cha argued in the op-ed for an alternative strategy of enhanced and sustained international pressure on Pyongyang to denuclearise, saying it is likely to deliver the same potential benefits as a limited strike, without the self-destructive costs.

He proposed a four-point policy platform for the US government: 1. Continue to strengthen the coalition of United Nations member states it has mustered in its sanctions campaign; 2. Boost alliances with Japan and South Korea with integrated missile defence, intelligence-sharing and anti-submarine warfare and strike capabilities; 3. Build a maritime coalition around North Korea involving rings of South Korean, Japanese and broader U.S. assets; and 4. Continue to prepare military options. 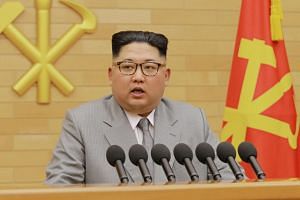 Cha said in his essay that he relayed some of the views stated above while he was "under consideration for a position in this administration."

Cha is the Korea chair at the Center for Strategic and International Studies (CSIS) in Washington.

He was director for Asian affairs on the National Security Council from 2004 to 2007, when he served as deputy head of the US delegation at six-nation talks that sought unsuccessfully to convince North Korea to stop developing nuclear weapons.

The rejection of Cha is "a bit discouraging for those who were looking for a strategic approach to the US-Korea alliance," said Michael Green, a former member of the US National Security Council staff and now senior vice-president for Asia at CSIS.