Ready-to-eat meals may not seem like a big deal to most Singaporeans, but they gave visiting businessman Bahadir Arman an idea.

In Singapore last year to attend the opening of a petrol kiosk, Mr Bahadir, 23, was struck by the array of convenience meals - from pizzas to curry rice - that could be bought from the FairPrice Xpress outlet at the kiosk.

It got him thinking about selling such meals back in Urumqi, the capital of Xinjiang, in north-west China.

"Ready meals make a difference for our Muslim students, who often have to take food to school that meets halal requirements," he said, referring to Uighur students.

To bring the same level of quality and standardisation to Xinjiang's food production business, Mr Bahadir has engaged a Singapore company to help set up a central kitchen. 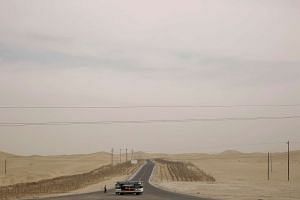 Come October, he expects to start churning out 120,000 ready meals every day. He is also in talks to bring restaurant brand Pastamania to China.

Even though they are a good distance apart - Urumqi is nearly 5,000km from Singapore - Singapore and Xinjiang businesses such as Mr Bahadir's have found reasons to collaborate. Xinjiang businessmen can tap the Republic's brand name and expertise, while their Singapore counterparts can leverage on the province's designation as a key hub in China's ambitious One Belt, One Road strategy.

Singapore businesses are already investing in Xinjiang. They include BreadTalk, which manages 25 outlets on a franchise model, and Wilmar International, which has joint ventures in oil and grains with local partners. At a Xinjiang-Singapore business forum yesterday, Minister of State for Trade and Industry Koh Poh Koon said the One Belt, One Road economic strategy has given new momentum to the development of China's western region, of which Xinjiang is a key transport and energy node.

"Singapore and Xinjiang businesses can work together in areas such as food production, retail, early childhood education and renewable energy, lending vigour to Xinjiang's development."

Dr Koh is in China as the head of a business delegation to Xinjiang and Kazakhstan. The six-day trip is part of the FutureChina Advanced Leaders Programme jointly organised by Business China and Nanyang Technological University's Nanyang Business School. The group will go to Almaty in Kazakhstan today.

Business China chairman Lee Yi Shyan noted the similarities shared by Singapore and Urumqi, adding that these will give Singapore businesses an edge in the semi-arid city.

A multi-ethnic city like Singapore, Urumqi has a population of about 5.5 million, of which about 70 per cent are Chinese. Uighurs, who adhere to Islam, make up 15 per cent - about the same ratio as Singapore's Malay population.

Mr Lee, formerly senior minister of state for trade and industry, said direct daily flights that started last year between Urumqi and Chongqing, and Chongqing and Singapore, have shrunk the distance between the two cities.