BEIJING • A long-distance bus taking tourists to Mao Zedong's home town in southern China erupted in flames, killing more than two dozen people on board, according to official statements and news reports yesterday.

The diesel-powered bus was going from Henan province in central China to Hunan province in the south, and the fire broke out near Changde, a city in Hunan, last Friday night, officials said in an account released through state-run media.

The flames swiftly consumed the bus, and at least 26 of the 56 people aboard died, apparently trapped by the flames. Twenty-eight other people were injured and treated at three hospitals, including five who were said to be in serious condition.

The cause of the fire is being investigated.

One Chinese news website, Shangyou News, interviewed a survivor, who said that the bus had been taking tourists to Shaoshan, the small city where Mao was born, and that the fire broke out at the back of the bus, quickly overcoming passengers who did not have time to escape.

Two drivers survived and were detained while the police and safety officials investigated, the Changde government said.

The accident is another jarring reminder of China's shaky safety record, coming a day after a blast at a chemical plant in the eastern part of the country killed at least 64 people. 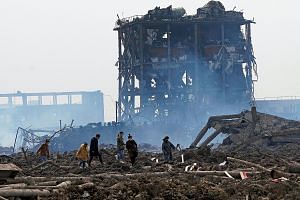 Deaths on Chinese roads have risen with the rapid expansion of expressways and car ownership. The government has responded with tighter enforcement of speed limits, bans on drink driving and stricter vehicle checks. Still, nearly 64,000 people died in transportation accidents in China in 2017, according to government statistics.

The real toll could be much higher. Past studies have found that Chinese police statistics seriously underestimated road deaths, and, in 2016, the World Health Organisation said that about 260,000 people die on Chinese roads every year.

Last year, there were five road accidents in China in which 10 or more people died, a decline from 2017, the Ministry of Public Security said in January.