In their commentary, the writers say that the diversification of university entrance exams has piled more pressure on schools, which is likely leading to more errors which can affect future of the students.

TOKYO (THE YOMIURI SHIMBUN/ASIA NEWS NETWORK) - A series of errors were unearthed in the second round of entrance exams held in February last year by Osaka University and Kyoto University, which later announced they would accept an additional 47 applicants as a result.

The diversification of university entrance exams has put increasing pressure on the schools, which is likely contributing to such errors. Universities must do their utmost to prevent these mistakes.

Every year, there are about 200 to 300 errors involving university entrance exams nationwide, made during such processes as preparing questions, scoring and clerical work.

The Education, Culture, Sports, Science and Technology Ministry began asking national, public and private universities to report errors from exams starting from the 2000 academic year, when 33 errors were reported.

During this spring's entrance exams, Doshisha University announced there were three errors in its test questions. Errors were also found at Ritsumeikan University, Kwansei Gakuin University and others.

One factor behind the increase is the diversification of entrance exams.

With fewer children, many private universities are trying to bring in applicants through such methods as providing a consolidated exam for all departments, in addition to the existing general entrance exam system where a different test is held for each department. Another method is giving examinees more options as to which day they will take the test.

Exam questions must be created for each test. Meanwhile, more and more universities, including national and public ones, are introducing new admissions policies or expanding established ones through recommendation-based admissions or AO (admission office-managed) admissions.

AO and recommendation-based admissions have been in place at Kyoto University since the 2016 academic year exams and at Osaka University since 2017, selecting applicants based on such criteria as their high school grades, the test by the National Centre for University Entrance Examinations, short essays and interviews.

"These admissions procedures are necessary to choose a diverse range of independent students, but they create more work for the staff," said a senior official at Osaka University.

Errors in the second-stage tests for both Osaka and Kyoto universities were found in physics questions regarding how sonic waves are transmitted, which students do not learn in-depth in high school.

"We tried to make challenging questions," Kyoto University Executive Vice-President Masao Kitano said at a press conference on Feb 1. However, the two possible answers presented for the question could both be considered correct because the conditions given in the question were not sufficient. 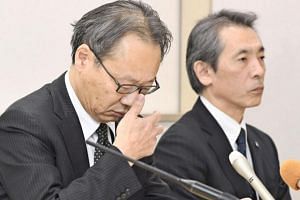 In the Osaka University exam, an answer that could not be elicited from the question's explanation was set as the right answer.

Both universities held more than 10 meetings to compile the tests and checked them, but they still could not catch these errors.

"Many academic staff at universities don't have a concrete grasp of high school curricula," a national university professor said. "They may be professionals at research, but when it comes to making entrance exam questions, they're amateurs."

These circumstances have created a trend to outsource the compilation and checks of entrance exam questions to cram schools and other institutions.

An education ministry survey showed that the number of universities that outsourced compiling exam questions was 98 for the 2013 academic year entrance exams, up from 71 for exams held in the 2007 academic year.

"We risk diverting from examinees' sphere of knowledge and academic ability if we create exam questions based on ideas within the university alone," Tohoku University Professor Naoki Kuramoto said. "We need staff familiar with high school to make entrance exams."

Cases like those seen at Osaka and Kyoto universities, where the errors remained uncorrected for nearly a year, could seriously affect the future of the examinees.

In a case at the University of Toyama that came to light in 2001, 16 applicants were mistakenly rejected due to errors in questions on both the 1997 and 1998 academic year entrance exams. The university was aware of the errors in 1999, but was found to have covered them up, which ultimately led to the resignation of the university president.

"Crucial errors can damage universities' reputations," said Professor Dai Nishigoori, director of the Saga University Admission Centre specialising in university entrance exams. "Not the individual school officials in charge, but universities as a whole must recognise the importance of preparing for risk and arrange a system to reduce errors or, should they occur, minimise their impact."

Why do entrance exam errors persist? We asked Kyoto Sangyo University's Professor Toshihide Masukawa, 78, who won the Nobel Prize in Physics and has experience in writing entrance exam questions. The following is excerpted from his remarks.

Prof Masukawa: "It's quite difficult to make questions for university entrance exams.

"In physics, when you try to use natural phenomena in a question that high school students will understand, some conditions may get left out. On the other hand, if you make a question too specific, you may create a setting that could never occur in real life. Writing elaborate questions makes it easy to get trapped.

"Test-makers tend to get their vision fixed and become unable to see the possibility of other settings. Even when several people are involved in making questions, they'll be dragged into a certain assumption while working together. It would be great if people completely unrelated to the process looked at questions objectively for the big picture, but that requires a lot of time and effort.

"It's fun to rack our brain to create entrance exam questions. But university professors are busy with their own research and writing papers, and they can't really spend too much time creating tests."

"Good exam questions give examinees a sense of satisfaction and accomplishment when they answer them. Or the answer is written on a single line, and the remaining space is a column so that the test-graders can see the examinees' logic and thinking process. It's fun to find answers that make the grader say 'How smart!' But this type of question requires great care because professors need to discuss how to score it.

"A single point can decide whether an examinee passes. But exams are actually not so accurate as methods of measurement. Scores and rankings easily change if questions are slightly changed. Too much emphasis is placed on scores.

"Like overseas, school enrollment should be made easy with things getting difficult after one starts university. The real thrill of physics is to wonder at visible phenomena and discover the regularity behind them. I want students to be interested in this no matter where they enroll."

Born in Nagoya, Prof Masukawa serves as a professor emeritus at Kyoto University, a professor at Kyoto Sangyo University and the director of the Maskawa Institute for Science and Culture. He won the Nobel Prize for Physics in 2008.

■The authors are staff writers of Yomiuri Shimbun, which is a member of The Straits Times media partner Asia News Network, an alliance of 23 news media entities.