SEOUL (AFP) - The head of South Korea's Lotte Group on Tuesday vowed a new era of corporate governance and transparency as he apologised for the family feud engulfing the beleaguered retail giant.

In an address broadcast live on television, group chairman Shin Dong Bin also sought to deflect growing anti-Japanese sentiment surrounding Lotte, which was founded in Japan but does 80 per cent of its business in South Korea.

Talking in accented Korean, the native Japanese speaker twice bowed deeply before the cameras in a show of contrition for the bitter and very public battle for corporate control that has pitted him against his father and elder brother.

"The current dispute has occurred as we have failed to make efforts to improve corporate governance and enhance transparency," Mr Shin said.

"We will be bold in reform in order to address concerns held by the people of Korea, our shareholders, contractors and employees," he added.

At stake in the Lotte feud is control of a sprawling conglomerate with 80 units across Korea - spanning retail, amusement parks, hotels and chemicals - and total combined assets of around US$90 billion (S$124.5 billion).

Among other reforms, Mr Shin said he would push for the public listing of Hotel Lotte, which effectively controls the Korean business, while also streamlining the group's complicated web of cross-holdings to enhance transparency. 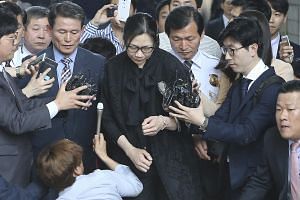 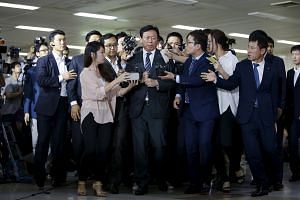 "Lotte belongs to Korea," the chairman said, stressing that the group's Korean interests dwarfed the Japanese-based side of the business in terms of employee numbers and sales.

"There has been little flight of capital back to Japan," Mr Shin said, adding that earnings made in South Korea had been ploughed back into the domestic business.

Lotte was founded in Japan in 1948 by Mr Shin's father - South Korean-born Shin Kyuk Ho, now 92 - and grew from a seller of chewing gum to a confectionary giant. It expanded to South Korea after Tokyo and Seoul normalised relations in 1965.

The row within the Shin family has fanned the embers of the anti-Japanese public sentiment the group has long contended with in South Korea - largely due to the family members' awkwardness with the Korean language.

The battle for control of the conglomerate has pitted Mr Shin Dong Bin against his father and his elder brother Shin Dong Ju, with accusations of dirty tricks and attempted boardroom coups.