Nearly two million devotees flocked to the heart of Manila to join a day-long procession of an iconic, 400-year-old image of Jesus Christ, despite sweltering heat and reports of planned terrorist attacks.

The procession began at around 5.30am yesterday when a carriage bearing a life-sized, cross-carrying statue of Jesus Christ - called the "Black Nazarene" because of its exterior - left the Quirino grandstand that straddles Manila Bay.

The carriage was towed across 10km of city roads and alleys, towards a church in central Manila's Quiapo district, where its arrival, expected at around 1am today, will mark the end of the Feast of the Black Nazarene.

During the procession, known as the "Traslacion" ("to transfer"), devotees, mostly barefoot, push their way through the crowd to touch the statue, wipe it with a white handkerchief or towel, or hold the thick rope used to tow its carriage.

The Black Nazarene creates a frenzy in the Philippines, where four in five are Catholics, as it is believed to perform miracles. Devotees claim clothing rubbed on its wooden skin during the "Traslacion" acquires mystical healing powers. 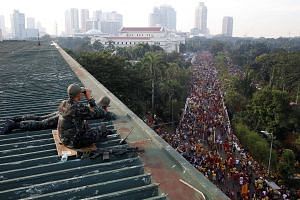 In Pictures: Annual procession of the Black Nazarene in Philippines

"The devotion… is somewhat similar to a pilgrimage experience. Every year, they come and somehow something changes in the people," said Monsignor Jose Clemente Ignacio, rector of the Quiapo church where the Black Nazarene is housed.

President Rodrigo Duterte, who has fought with church leaders over his anti-crime drive, support of artificial birth control, and his womanising ways, offered encouragement in a statement.

"Prayers are likely answered because we do not give up or get tired from asking God for the fulfilment of our heart's desires," it said.

The statue of the Black Nazarene was brought to Manila by a group of missionaries from Mexico in 1606. It was enshrined in two churches before it found its current home in Quiapo in 1767.

The popular belief is that the statue's ebony exterior was due to a fire on the galleon that brought it from Mexico, but some scholars believe it was naturally dark, as it was carved from mesquite wood.

Red Cross officials said two men who went to Quiapo on Sunday for a chance to kiss the image of the Black Nazarene died. One suffered cardiac arrest, while the other had a seizure.

With temperatures climbing to 30 deg C yesterday, thousands were treated for health emergencies. This year's procession was held under the threat of attacks from Islamist militants in the war-torn southern island group of Mindanao.

A bomb disposal team was deployed to a plaza along the procession route yesterday to check on an unattended bag that later turned out to contain just a shirt and personal items. More than 5,700 policemen were deployed to secure the procession.