BEIJING - Bicycle-sharing firm ofo is attempting to attract more women to its cause, after debuting its new "princess bike" last Friday (June 9).

The Beijing-based company aims to stand out from the competitive bike-sharing market in China by becoming the first firm to introduce a bike targeted at a specific group of users.

Some 10,000 "princess bikes" will debut in Beijing and Shanghai first before they are introduced to other cities.

"We will use our platform and advantages in R&D (research and development) to connect people with different kinds of bikes, providing different user groups with a diversified bike-riding experience."

The princess bike is painted in ofo's signature bright yellow but sports a more classic look. It comes with accessories such as leather seats and cane baskets, and is lighter and easier for women to handle.

According to news channel CGTN, the bike also comes with a semi-enclosed chain box to prevent its rider's skirt or dress from being caught in the chain. 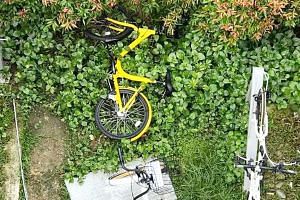 ofo made its Singapore debut at the start of the year and is one of three firms - along with local venture oBike and ofo's China rival Mobike - vying for a slice of the local market.